After hundreds of years of peaceful expansion across the universe, humanity has finally made first contact with an alien entity, and it hasn’t gone well. Join four unlikely survivors — Guion, Nessa, Liu, and Lance — as they battle endless alien hordes in The Anacrusis (Game Preview).

That’s where the story of The Anacrusis starts, but I’m here to share some insider tips to help you get the most of your time on The Isolode, the massive starship where our foursome must gear up, learn to fight, and conquer the alien hordes to have a chance to save humanity.

1: The first thing everyone should know is to use all the tools at your disposal. There’s no reason to hoard grenades or special weapons in your fight against the alien hordes — toss those stasis grenades, drop that auto-turret, and fire your arc rifle. The Director will keep the loot flowing.

2: Pulse is your best friend. It will get you out of trouble, but only if you use it! It knocks all the enemies around you away, so a quick Pulse can clear a path through a horde, shove an attacker over a ledge, or just buy you enough time to reload your blaster. If you upgrade it with the right perks, you can even give your teammates some protection.

3: Listen to the characters, they give you a ton of valuable information. Not only do they talk about their hopes and dreams, but they also tell you what you should be doing in each episode and even shout warnings when they see a special enemy, a valuable healing item or special weapon. They even call out enemies sneaking up behind you.

4: You’re going to love Matter Compilers. Each one contains a selection of perks that you can choose from you find them in the game. By the end of each episode, you’ll have a unique build assembled from the 40 (and counting) perks we’ve built. Don’t worry, we’re not going to make you do any math. Our perks supercharge your character with new abilities that will change the way you play, not boring incremental damage upgrades.

5: Pay attention to the perks you select! Many of them interact with each other to become super-powerful. Healing Goo, which lets you give temporary health to your teammates using Goo Grenades, paired with Grenade Extender, which you more space grenade storage, turns you into a long-range teammate healing machine.

6: When you find a Matter Compiler, you should talk about your perk build with your teammates! They’re nice people and they probably smell good. Most of the perks have several complements. For example, if your teammate has Target Protocol, which lets them automatically mark special enemies when they aim down sights, picking up Marked Protocol will give you a burst of adrenaline anyone marks a special enemy.

7: At the same time, there are a handful of perks that are almost always useful. The quick pickups that come along with Fast Heals have saved my team more than once. Turning headshots into AE explosives with the Criticality perk is always a crowd pleaser. And anything that gives you more pulse charges or a quicker pulse recharge is a winner.

8: A well-timed Pulse can parry most ranged attacks. It will bounce spawner turret projectiles back to their source, block a grabber’s long spindly arms, and stop gooper shots from hitting their intended target. The timing is tricky but try hitting pulse after you hear the characters shout a warning.

9: With multiple enemies that can grab or otherwise immobilize you, the best strategy I’ve found is to avoid getting cornered. Setting up in a corner or a protected area is an invitation to get grabbed, gooped, or bombarded with Spawner turrets. A strafe or quick pulse will let you block most ranged attacks. Maintaining your mobility will keep you alive.

We’re really excited to get the game out in Game Preview for players to play and give us feedback that will help shape the future of The Anacrusis (Game Preview). And whether your friends are playing on Xbox Game Pass or PC Game Pass, or if they bought the game on Xbox Series X|S, Xbox One, Windows 10, or one of our other launch platforms, you’ll always be able to play with them using full cross play support. And after you play, we’d love to get your feedback over on our Discord. 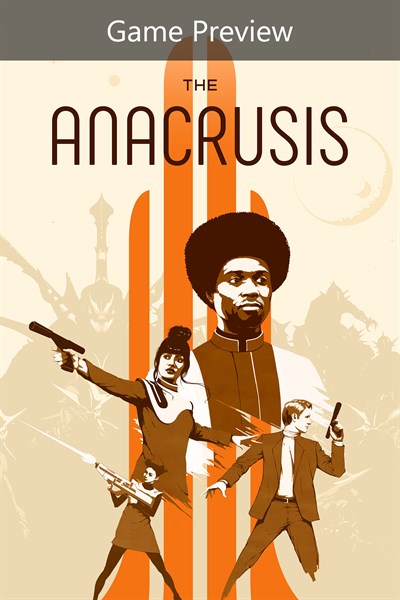 $23.99
Get it now
PC Game Pass
Xbox Game Pass
Free Trial
The Anacrusis is a four-player, cooperative first-person shooter set aboard a massive starship stranded at the edge of explored space. Team up with your friends in an infinitely-replayable fight against alien hordes to unlock perks, weapons, and new ways to play that you can share with your team! The Anacrusis is launching in Game Preview in January 2022!

Never Fight the Same Battle Twice
In The Anacrusis, the AI Driver controls every aspect of the game. It spawns every enemy, directs each boss, and places every weapon, gadget, and health kit. No matter your skill level, you'll find the perfect level of challenge. More than that, the AI Driver creates the kinds of video game moments that you can’t wait to tell your friends about.

Fight Aliens Using Fantastical Weapons
Battle the alien menace using an astounding arsenal of classic sci-fi weapons. Buy yourself some time with a stasis grenade, toss a shield grenade to provide instant cover while you pop off a heal, and bring your friends back to life using the respawner. Or throw caution to the wind and burn friend and foe alike with the laser rifle.

Earn New Perks and Change the Way You Play
Matter compilers spread throughout the game give you access to dozens of perks that will change the way you play. Stack all of your upgrades to power up the last-resort pistol or boost your defense by supercharging your shield pulse. Unlock new perks as you play, and share your unlocks with everyone on your team!

A Fight For Survival Is Just the Beginning
The first season of The Anacrusis tells the story of four unlikely survivors–Nessa, Guion, Liu, and Lance–who are unwilling combatants in the battle to defend humanity from the alien menace. Play more and unlock more of the unfolding mystery of the alien attack.

This game is a work in progress. It may or may not change over time or release as a final product. Purchase only if you are comfortable with the current state of the unfinished game.

Related:
Get Ready for the Mushroom Wars 2 Competitive Scene
Next Week on Xbox: January 17 to 21
Guntech 2 is a New Retro-Style Space Shooter with Four-Player Couch Co-op