We are excited to finally announce the release date of Astalon: Tears of the Earth, coming to PS4 on June 3! We also have a brand new trailer that reveals a closer glimpse into the world of Astalon and a snippet from the upcoming arrange album.

Astalon: Tears of the Earth is a 2D action-platformer that follows three unique warriors on a perilous mission to save their town in a post-apocalyptic world. Having made a pact with the Titan of Death, Epimetheus, the characters are granted the power to grow stronger each time they die and must surmount the mysterious Tower of Serpents in search of answers. Players can switch between the three heroes and must use their unique skills to take down monsters, solve puzzles, find artifacts, and progress through the game, all while uncovering the intriguing backstory behind the Titan, the tower and the heroes.

As the first foray into the Astalon universe, Tears of the Earth is the long-awaited new title by Matt Kap (Castle in the Darkness, Binding of Isaac) and Jon Lepage at LABS Works, featuring character design by famed manga artist, Ryusuke Mita (Dragon Half).

Switching characters and utilizing their special abilities is key to progressing in Astalon. Players will have to decide which character works the best for each predicament, whether it be a puzzle, platforming situation, swarm of enemies, or boss.

Arias is a quick, short-range character who slashes with his sword. He starts the game with greater defense than his allies, and can use his sword to cut through vein doors in the tower. He is a young fighter who is willing to jump head-first into anything that stands in his way. As the son of the warrior named Silas, the wielder of the powerful Crystal Sword, he tries his hardest to live up to his father’s legacy.

Algus is a wizard who can use his magic to shoot magic bolts through walls and activate magic switches strewn about the tower. He made a pact with Epimetheus, the Titan of Death, to receive the power of reincarnation. He can use Epimetheus’ power to return again after dying, much to Epimetheus’s growing annoyance. What other powers does he possess?

Kyuli fights using a long-range bow, and her light weight allows her to jump off of walls to reach greater heights. She is a childhood friend of Arias, who once depended on tricks and thievery to survive. She was taken in by Arias’ village as a young orphan, and over time, has changed her outlook and ways.

Death is only the beginning

One of the unique aspects of Astalon is that it rewards players in defeat by allowing them to exchange collected orbs for various skills and upgrades when they reincarnate. Power up your heroes’ defense or attack stats. Purchase a relic that grants the power to gather fallen orbs, reveals secret locations, or prolongs invincibility. Players can play at their own pace by exploring thoroughly and bolstering their characters’ strengths, or use risky methods to slice their way up the tower furiously.

In addition to power-up pacts with Epimetheus, players must explore and collect a variety of artifacts to progress through the game, such as the Sword of Mirrors, that will bestow their characters with new abilities to explore further into the tower. Use campfires to save progress, change characters, and discover details about the heroes’ pasts. Astalon features hundreds of rooms to discover, hours of challenging exploration with a plethora of unlockables and secrets to reward the most inquisitive players. 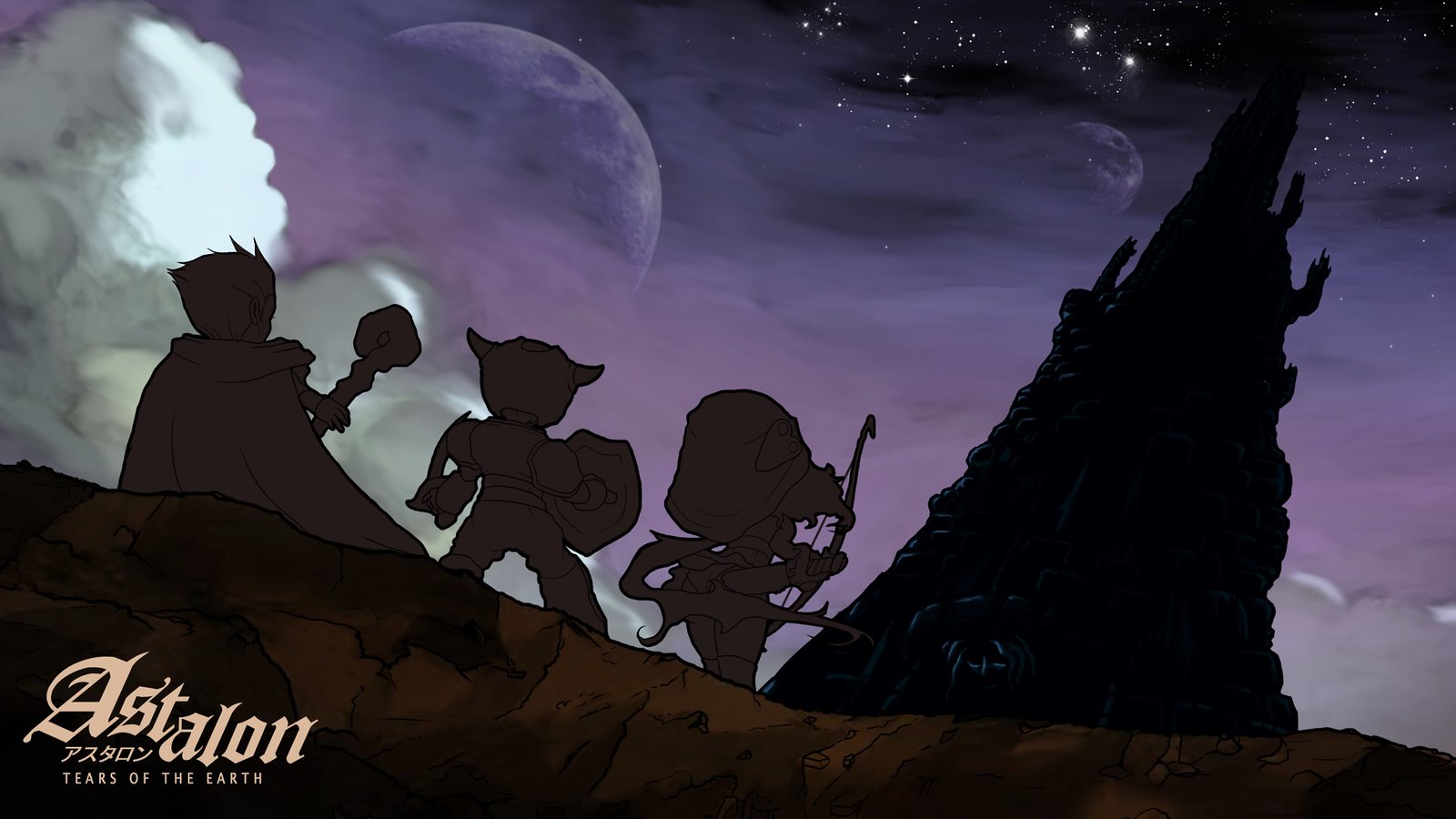 Astalon takes a lot of inspiration from specific 80s and 90s games, reminiscent of the days when you might have exchanged tips and secrets with your friends in the hallway at school. But it manages to be totally different in terms of feel — the sum of all the underlying gameplay systems, both old school and modern.

“Despite looking like a normal fantasy setting, it’s actually a deep, post-apocalyptic world, with a lot of inspiration taken from things like Mad Max and Fist of the North Star. There are also things loosely-based on Greek Mythological gods and creatures, something that has interested me since childhood,” says lead developer Matt Kap.

On a cosmetic level, Astalon reflects the 8-bit era both in terms of visual and sound. “I play in two touring bands: Mute (melodic punk rock) and Zapovid (Ukrainian party rock), so composing the music for Astalon was something very important to me. Although the in-game music is done in an 8-bit style, the arrangements were always planned out as fully orchestrated or rock pieces. We will be releasing an arranged album featuring a selection of music from the game, but done in higher-fidelity. It feels good to be able to release something musical while my bands’ touring is put on pause because of the pandemic.”

Astalon: Tears of the Earth launches on PS4 on June 3.