Making Cosmic Top Secret has been an amazing journey that all started with a pinch of curiosity. My dad was part of the Danish Intelligence during the Cold War and one day he accidentally told me that he worked on DASK, the first computer in Denmark. I got seriously intrigued, “What did he calculate on that machine?” But he refused to tell me, because of his lifetime confidentiality pledge. Rather dramatically, he said I could either know “All or nothing!” and I decided it is going to be all!

I wanted to turn this investigation into a game. I did not know at first what kind of game but just knew it had to include my dad saying “No! I can’t answer you!” I started playing out with ideas, drawing characters and items, following my dad around and recording him.

The game started to take shape and people joined the production. I called the Intelligence and asked to get access to my parent’s files. They were surprised but agreed to discuss it with the “Organisation.” My parents were invited for a briefing about what they could talk about and or not. Then it became quite awkward – they were asking: “Well, Trine, go ahead and ask us: What do you really want to know?” and I was like, “I don’t know what it is I don’t know and want to know.”

This became for me an important narrative aspect of Cosmic Top Secret:

These are the questions I hope the players will ask themselves while playing the game.

The art style of Cosmic Top Secret came up intuitively – I printed a photo of my dad in a rush, cut him out and drew some cartoony legs. Because of the fisheye angle from the photo, he ended up having huge hands and arms. Two fingers were bandaged together, like his real fingers were after an accident throwing hand grenades.

It was important for me to keep those kinds of “leftovers” from reality and portray him as a real human being with all it implies of faults and scratches. Those were also the first signs that he would not stay with me physically forever. He became so much a character, that it was impossible to change it and in a way his design defined the style of the rest of the universe. The crumbling of the paper, the characters falling apart, the old documents with sensitive information etc., everything seemed to fit together in that structure. These big hands were also great fun for the animators.

During the seven years of production, we researched and collected tons of old photos, videos, interviews, documents, items – and of course recorded many new ones too. The hybrid visual identity we settled with allowed us to present all this true content and sometimes let players directly interact with it.

To summarize, Cosmic Top Secret is an autobiographical adventure game about The Cold War that I grew up in and my parents protected me from while working secretly for the Intelligence. It is also a story of broken legs, unspoken things, and up-and-down feelings. Anyone might relate to it differently but personally it makes me think ultimately that despite our faults we should accept and love oneself and each other. What started as a personal project rolled into a paper ball that got larger and larger, grabbing some awards on the way, inspiring the creation of a life-size event at the Cold War Museum of Denmark, and ultimately making its way to Xbox One, where it launches on May 21! You can pre-order it now with a 10{bbeedaa25bbf30d0e5e871c44901147535525259d4fca9df3490b2459ba9638d} discount.

I cannot wait to share my amazing journey with you, in-game as Agent T! 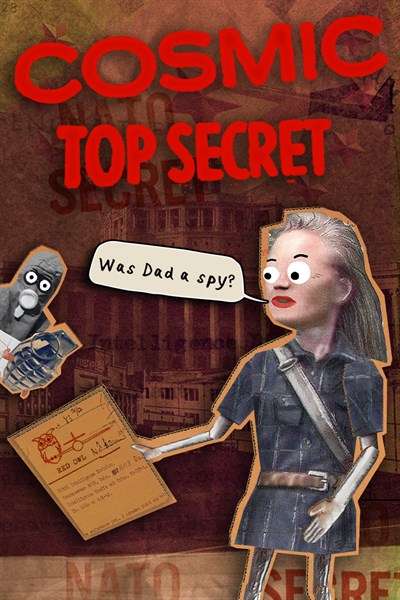 $8.99
Pre-order
EXPERIENCE SOMETHING UNIQUE
“Cosmic Top Secret” is the weird, but official, term NATO uses for top confidentiality. A fitting name for this game since it needed military clearance to be released!
Cosmic Top Secret won multiple awards for the innovative ways it engages players in deeply documented plots. The game even inspired the creation of a life-size event at the Cold War Museum of Denmark.

SPIES, SOLDIERS & POLITICIANS
Meet people who made history – spies, army leaders, math geniuses, fighter pilots and more – from both sides of the Iron Curtain and with incredible, absurd or thrilling stories.

FIRST COMPUTERS & NUCLEAR THREAT
Discover fascinating programs and devices designed to outsmart the enemy in a tense context of international espionage and fear of atomic war. This is the dawn of new technologies.

DEEPLY PERSONAL, YET RELATABLE STORY
“Like a million others, I’m an ordinary 'kid of the Cold War'. Just a very curious one with parents working in Intelligence services. By getting to know me and my family better, you might see yourself and even feel the itch to investigate your loved ones!” – Trine Laier (“T”)

PUBLISHED BY Nakana.io
“We gather games that share a strong experience to remember. We’d never seen anything like Cosmic Top Secret before!” – Mikaël Bourget, founder of the publishing label.

Related:
Subnautica: Below Zero is Now Available for Xbox One and Xbox Series X|S
Next Week on Xbox: May 17 to 21
Boomerang Fu: Grilling Spree Update Out Now