The long wait for the highly anticipated time-traveling RPG Cris Tales is finally over. After seven years of development, we reflected on how much work went into this overly ambitious indie project. The developers from Colombian-based studio Dreams Uncorporated made it clear from day one how passionate they were about this project and made no sacrifices in bringing their unique vision to life – and that is no exaggeration. With an entire in-game world explorable in the past, present, and future with drastic changes possible due to choices you make throughout the story, almost every building, character, and enemy needed to be drawn and animated three times.

Ultimately it is that attention to detail that has made this such an inspiring and enjoyable project to be a part of. To them, Cris Tales is more than just a turn-based RPG, but an amalgamation of everything great about indie games and Colombian culture, which inspired many of the characters’ designs and locations you will explore in-game.

The overwhelming support we received over the past few years from the community has been what has kept the team going. From sharing fan art on social media to meeting us in person at PAX and E3 to dropping comments on new trailers and even cosplaying as your favorite characters, the support from fans has been a major contributor to making this game what it is today.

After a young orphan named Crisbell becomes a novice time mage, she is warned by Matias, a friendly froggy companion, of a disastrous fate that awaits their world. Determined to save her home, Crisbell will build a brigade of colorful companions to prevent the Time Empress and her vision of a cataclysmic future. On her journey, she will recruit Christopher the Mage Warrior, the defensive expert who wields a splitshield, Willhelm the Child Mage who commands magic to support his party, Zas the Wild Card who attacks with an assortment of luck-based items, and JKR-721, an android who uses his enhanced speed to channel electricity to unleash a flurry of attacks. Up to three members can be active in your party at a time, so mix and match your favorites!

Alter the Past to Change the Present and Save the Future

Crisbell’s abilities as a time mage will allow you to see the past, present, and future all on one screen simultaneously. When exploring the different kingdoms, these triangular panes give you a window into each of these periods, which Matias can interact with directly by hopping between them. These update in real-time, so the decisions you make in various quests and sidequests will show the ramifications of your actions in all three time zones. Every choice you make will influence how the world develops, and you will be able to witness how these choices shape the future instantly, for better or for worse.

A Unique Spin of Turn-Based Combat

These unique time properties apply to combat as well. Throwing an enemy into the past or future may manipulate their age, making them younger and inexperienced, capable of doing less damage, or old and frail, making their defense fall. This power can also be combined with the skills of your party members — inflicting Willhelm’s poison on an enemy that deals damage over several turns can be applied all at once if the enemy is thrown into the future, taking large burst damage, and preventing them from curing it. Similarly, a heavily armored foe hit with Christopher’s water magic can be thrown into the future, where the water has caused the armor to grow rusted, lowering its defensive properties. However, some enemies may get stronger with time — an old and injured monster thrown into the past may become more agile and aggressive. Knowing how your party’s abilities synergize and how time manipulation will affect different enemies will become crucial to surviving some of the game’s tougher fights. We encourage you to experiment with all the different combinations to find your own strategies

Cris Tales‘ vibrant world has so much to do and see it’s almost impossible to see it all your first time through. With the ability to observe how the world has grown and will change, everyone including background characters will have their own story to tell. A stroll past a soldier in town will make him appear as a young boy training in the past, a distinguished soldier in the present, and a retired and battle-scarred old man in the future, all in a matter of seconds. Perhaps you may even fight him in the present only to notice him mysteriously missing in the future. Whatever choices you make, we hope everyone enjoys their time with Cris Tales. 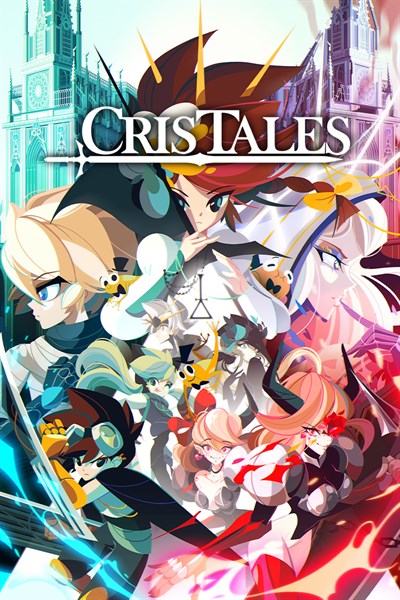 ☆☆☆☆☆
10
★★★★★
$39.99
Get it now
Cris Tales is a gorgeous, indie love letter to classic JRPGs with a new perspective. Peer into the past, act in the present, and watch as your choices dynamically change the future — all on one screen as you play! Join the newly awakened Time Mage Crisbell and her fantastical companions in a fantasy world facing a grim future. The powerful Time Empress and her forces threaten to bring about a cataclysm tearing apart Crystallis and the other four Kingdoms of the region.

To stop the Time Empress and rewrite the future of the land, you will embark on a harrowing journey across the kingdoms, meeting and recruiting powerful allies to aid in the fight. Master their abilities and Crisbell’s unique Time Magic to overcome mighty foes – send them into the past to face their weaker, younger selves, send a foe to a future where they’ve succumbed to all the damage of a poison applied in the present, or create your own strategies in this one-of-a-kind combat system.

As Crisbell’s powers grow, you will make choices with far-reaching consequences for the people you meet – consequences that will impact the world you’ll experience in real-time throughout your journey. Every character, NPC, enemy, and even Kingdom has a past, a present and one or more futures, depending on your actions! Beautifully hand-drawn 2D art is animated frame by frame to bring the branching possibilities to life across more than 20 hours of gameplay.

Experience a unique combination of branching stories, innovative combat, and classic RPG excitement in Cris Tales’ exciting and unforgettable exploration of how our actions echo through time.

Key Features
• A Love Letter to Classic JRPGs – Inspired by timeless JRPGs like Chrono Trigger, Final Fantasy VI, Valkyrie Profile, and modern classics like Bravely Default and Persona 5, meet and recruit a unique cast of teammates, challenge myriad enemies, and make your way through an expansive world.
• Experience the Past, Present, and Future Simultaneously – Peer into and learn from the past, decide on actions in the present, and alter the course of the future in ways that will reshape the world dynamically depending on the choices you make.
• Master Strategic Turn-Based Combat – Warp your enemies into the past or future, synchronize attacks for enhanced group abilities, and master the timing of attack and defense to go beyond your party’s limits in combat.
• Uncover a Fascinating Story & Characters – The Empress’ plot to destroy the world is complex and layered. Use your wits and recruit powerful allies throughout the world to uncover and undo her multi-faceted web and make your way to the True Ending of this enchanting tale.
• Discover a Beautiful World – Climb aboard an airship or boat and traverse this handcrafted, dark fairytale world. From the shining kingdom of Crystallis to the slums of Saint Clarity, discover each unique location and shape its future."

Related:
Coming Soon to Xbox Game Pass: Microsoft Flight Simulator, The Ascent, and More
Our Minds Are Playing Tricks on Us: Hands-on with Psychonauts 2
Next Week on Xbox: July 19 to 23