The Flash’s time travel accidentally created an altered timeline where everything and everyone is different. Thomas Wayne, Batman’s father, is Batman. Cyborg is the quintessential super hero. Wonder Woman and Aquaman are at war. So it’s up to you to fix the timeline in DC Universe Online’s new episode, World of Flashpoint.

What’s better than new content? Free new content! World of Flashpoint will be free for all players on Xbox One. All you need is a Level 15+ character to join our event version, which can be accomplished in a flash (see what we did there?). There’s also a standard mode and elite mode with all World of Flashpoint content for our experienced players.

Get ready to travel across a diverse set of Flashpoint-inspired locations starting with the new open world area of Flashpoint Gotham City. Batman has agreed to save the world we know under one condition: help him keep his home safe. So, get ready to dive down from the rooftops and confront various Gotham City gangs as well as the prehistoric Kryptonian, Doomsday, as you try and patrol these crime-riddled streets.

The attack isn’t just a ground assault, though. Heat Wave is mounting an aerial attack with plans to crash the Hall of Doom into Flashpoint Gotham City, which means you’ll need to join forces with Flashpoint Batman and Cyborg in the Queen’s Row Penitentiary [2-player duo] to neutralize the threat.

Players can also adventure into new areas of Atlantis and Themyscira in The Royal War [4-player alert]. And, after you’ve earned Flashpoint Batman’s trust, he’ll share his own plan to stop the conflict: if the Atlanteans and Amazonians both have their own massive, “super” weapons, just take out both assets and end the stalemate. It’s just crazy enough to have a shot at working, but it does go against Professor Zoom’s masterful plan…

Finally, and without giving too much away, Flash and his allies need someone from the future to leverage enough Speed Force to revert the paradox. That means you can travel to Nightmare Central City [8-player raid] and fight alongside Flash and Kid Flash as you make your way through Rogues Gallery super villains like Pied Piper and Captain Boomerang. Then head into the 31st Century [8-player raid] and confront Brainiac himself!

New or Returning to DCUO?

Download DCUO for free from the Microsoft Store on Xbox One. Once you start the game, choose your morality, mentor, and powers to use in battle. Then create and customize your unique character to begin your adventures in the iconic DC universe!

For additional content details and guides to get started in DCUO, please visit us at DCUniverseOnline.com. And if you want to learn more about all things Flashpoint, be sure to check out dcuniverseinfinite.com to read the comics that inspired this latest episode! 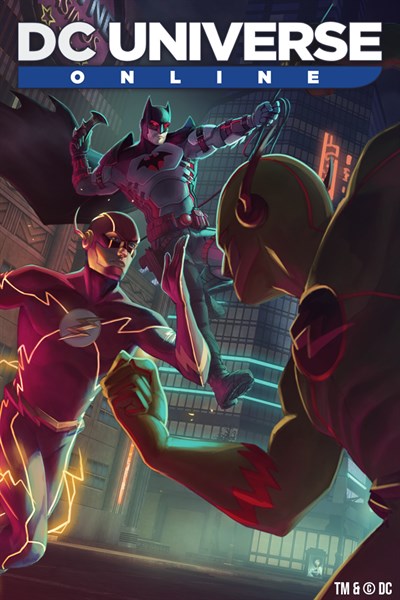 ☆☆☆☆☆
727
★★★★★
Get it now
DC Universe™ Online is now on Xbox One! Join thousands of other players in this Free-to-Play, massive online action game set in the popular DC Comics universe. Choose your side – Hero or Villain – and create your character to experience true action combat, as you fight alongside and against legendary characters such as Batman, Wonder Woman, Superman, Lex Luthor, and Circe.

Jump in and explore the DC Universe; walk the darkened streets of Gotham City, investigate the mysteries of the futuristic cityscape of Metropolis, and travel to legendary locations such as Arkham Asylum and the Watchtower.

The Xbox One version of DC Universe Online includes the following:

Become a part of our thriving community at DCUniverseOnline.com!

Please note the download is around 35GB and could take several hours, but it’s worth the wait!