As we are finally releasing Imagine Earth on Xbox One and Xbox Series X|S I started remembering what an adventurous development this game was for us. Martin and I have put seven years of intense work into our world simulator which is quite special in the way it combines city building and economic strategy, resource management and ecological survival on global planets.

The game combines many valued game mechanics in a unique way and all the time we wanted it to run on Xbox. So we optimized everything for gamepad controls when creating interfaces and storytelling. An early version already ran on the Xbox 360 devkit since the first prototype we made as students was a finalist in Microsoft’s Imagine Cup Finals ’08 in Paris where they had the category Game Design for the first time ever. While the game grew up we changed the game engine twice and overhauled interface and character design even more often.

I’m sure that we could only keep up this long dev journey thanks to public recognition like the Imagine Cup and of course the support of over 43,000 backers in early access. Over the years, the climate crisis has become more and more blatant and arrived as an issue in the middle of society. The growing awareness of the issue gave us the confidence to work on an urgent topic and incorporate the climate crisis into the gameplay as an authentic core mechanic.

Build Your Own Civilizations on Distant Planets

Over time, Imagine Earth has become an economic strategy game with an environmental planet simulation. The job of a space colony manager is to build up and supply colonies on a global scale. The aim is to develop efficient production and space trade to thrive and prosper but also doing research and development for new technologies to avoid catastrophes, rising sea levels and global climate collapse.

At start, it’s a peaceful infrastructure building game as the use of weapons is prohibited in its futuristic scenario. First players have to build city districts and supply them with food, energy, and goods. Finding the best placement of every building is a complex puzzle as they have many positive and negative influences on each other and there are various ground conditions and deposits on the fields. With the produced goods or harvested materials additional equipment can be crafted or more complex items for sale. To preserve quality of life for the colonists one needs to find a balance between growth and sustainability sooner or later.

A Race for Limitless Economic Growth in Space

Furthermore the game puts the player in the role of a global economic actor. The player has to compete economically against other corporations for supremacy over a globalized market. This includes share trading and hostile takeovers but you can even use terraforming and weather manipulation to crash your opponents stock prices. Form alliances or face all kinds of diplomatic struggles.

The factions might be forced to cooperate from a certain point of planetary development to preserve the environment as their common basis of life. The world congress is a democratic allegiance containing every faction on the planet. It adopts resolutions for taxes and subsidies, penalties, and supplies. Brought closer together by the threat of climate change the factions discuss emission levies and environmental funds or banning certain technologies like fossil fuels and hopefully find strategies and answers to preserve their homeworld.

The Fate of Whole Worlds Lies in Your Hands

As said, we started this project as students once and the way the prototype seemed to make the most threatening and pressing problem of our time playable in a simulation has kept us excited and busy for so many years now. The challenge of global climate change, which seems too abstract and inconceivable to the individual, should become tangible and treatable by giving the player the responsibility for the fate of a global ecosystem.

The science fiction scenario, which we wrapped around this topic over time, primarily serves the purpose of enabling a thought experiment with an open outcome and to eliminate ideological reservations and sensitivities, which would have blocked a terrestrial scenario. In terms of story-telling and dramaturgy, we were constantly faced with the challenge of balancing entertainment and seriousness so that Imagine Earth could shine as a game and still raise plausible questions without becoming moralistic or informative. Rather, it should be inviting, motivating, and arouse curiosity. The lightweight visual style is supposed to raise accessibility of gameplay. It also celebrates the triangle, that smallest, universal component of all 3D computer game worlds, as a stylistic design element. 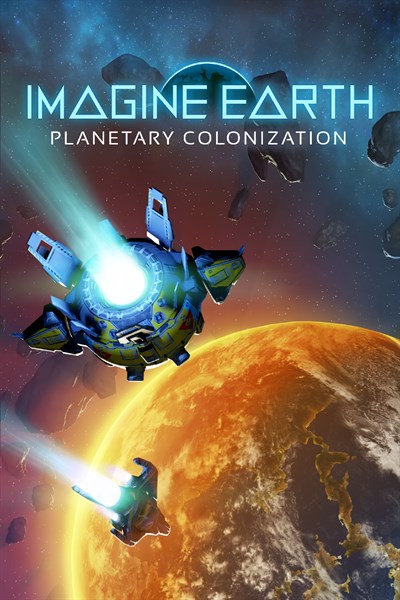 Imagine Earth is a real-time planet simulation and a build up strategy game. Your job as a space colony manager is to explore and populate distant planets. Build up thriving and profitable colonies on a global scale and trade resources and goods into space.

You will experience a massive conflict between the profit goals of the interstellar corporations and the need to preserve living conditions for your people. Exhaust emissions and ground pollution impact the global climate as your colony is growing. Increasing temperatures melt down polar caps and your colonies are destroyed by rising sea levels.

Raise great cities and satisfy their appetite for resources by building power plants, farms and factories. Dig for ideon crystals, pacify riots, research technologies and constructs and maximize your growth while maintaining a healthy ecosystem.

Get ready to deal with threats like asteroid strikes, twisters, wild fires, volcanoes and rising sea levels. Fend off space raiders and alien investors. Coexist and trade with natives, merchants and hostile colonies.

In 2048 huge corporations have divided Earth among themselves and exploited its natural resources to a large extent. Now the discovery of ideon crystals allows journeys into space, while technologically and ideologically almost everything remains the same. The laws of the market are being spread into the universe.

On each discovered planet a competition for economic dominance breaks out. To expand your colony as fast as possible and overcome your opponents you exploit the freely available fossil resources and minerals. Additional money is provided by selling shares of your colony. Take over opposing companies by buying up their shares.

Merchants and technology traders organize the interplanetary trade and will happily buy all minerals and resources you extract from your territory while selling expensive technologies. The same goes for cooperating colonies and alien tribes that live on some of the planets.

Related:
Influence a Cast of Gods and the Shape of a New World in Mythic Ocean
Creating the Unique Movement of Blue Fire
Switchblade Explodes into Action Alongside New Game Modes in the Latest Rogue Company Update