When Alcina Dimitrescu (a.k.a. “Tall Vampire Lady”) was introduced to the world ahead of the first Resident Evil Showcase, many people fell head over heels for the nine-and-a-half foot tall femme fatale who’s brought excitement for Resident Evil Village to new heights (couldn’t resist that one). However, she’s not the only resident of Castle Dimitrescu. Not much is known about Alcina’s trio of deadly daughters who also call the castle home, so we figured it was high time to bring things back to ground level and shed just a little light on Bela, Cassandra, and Daniela. (But not too much light, though. They seem to prefer the dark.)

To find out more, we asked Resident Evil Village Director Morimasa Sato and Art Director Tomonori Takano about how the design of these three came together, including what inspired their creation, the initial concepts for their design, their obsession with “man blood”, and the fate of those who enter – but never leave – the foreboding Castle Dimitrescu.

Lady Dimitrescu has gotten a lot of attention on the road to launch. What has the dev team’s reaction been to this outpouring of support?

Sato: She was born from the desire to create a character with a lot of charisma, but we most definitely didn’t anticipate the outpour of positive reception towards her. The development team as a whole has been really surprised with everyone’s reaction.

Lady D’s wardrobe is inspired by styles from the 1960’s. What inspired the daughters’ fashion?

Takano: Their dresses and shoes also reference the style of the 1960s. However, when we designed the family standing amongst each other, we wanted to make sure that Dimitrescu herself stood out amongst the crowd. As a result, we fitted the daughters with more orthodox black garb that is reminiscent of what you might imagine traditional witches wearing. If you look closely at the pattern of their dresses, you can see that it is finely embroidered with floral patterns of the Dimitrescu family crest. 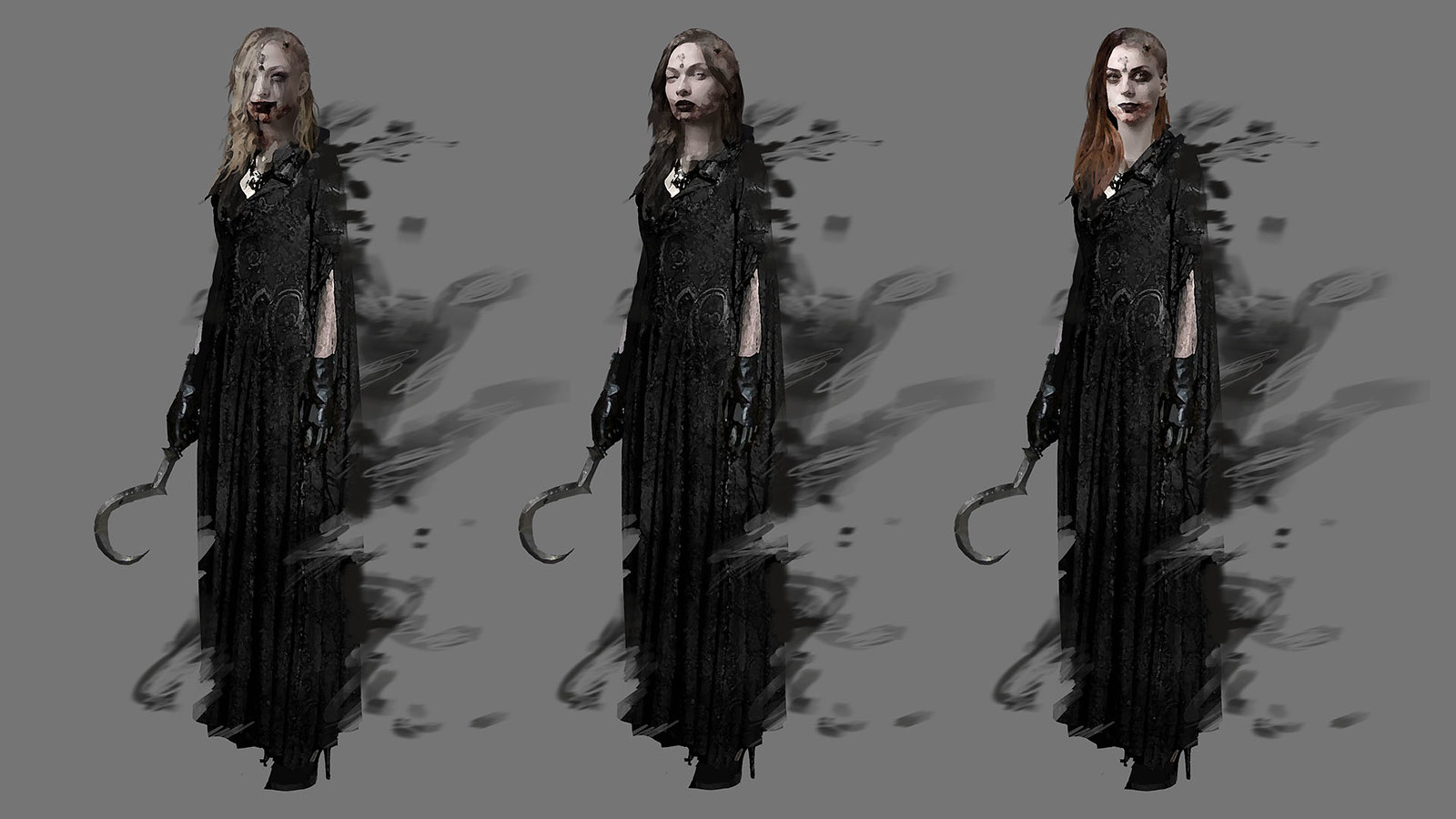 Concept art for the Dimitrescu daughters

Was there a design reason the team settled on three daughters?

Sato: We had a central theme or focus when designing each location of the village. For the castle section, the central theme was creating “beautiful horror”. That gave birth to the idea of having multiple daughters appear, all wearing expressions of complete madness. From there, we created the setting that they inhabited different parts of the castle. After doing multiple simulations to determine the number and frequency in which Ethan encounters them, we ultimately concluded that having three of them would be the best game balance, and Bela, Cassandra, and Daniela were born.

How did each daughter’s backstory come about?

Sato: The general theme that we asked ourselves was what a beautiful, yet horrifying female antagonist would be like. That was the overall picture we were striving for. We wanted players to also easily differentiate exactly which daughter is chasing after Ethan at any given time, which is why we added variation with both their appearances as well as their personalities. 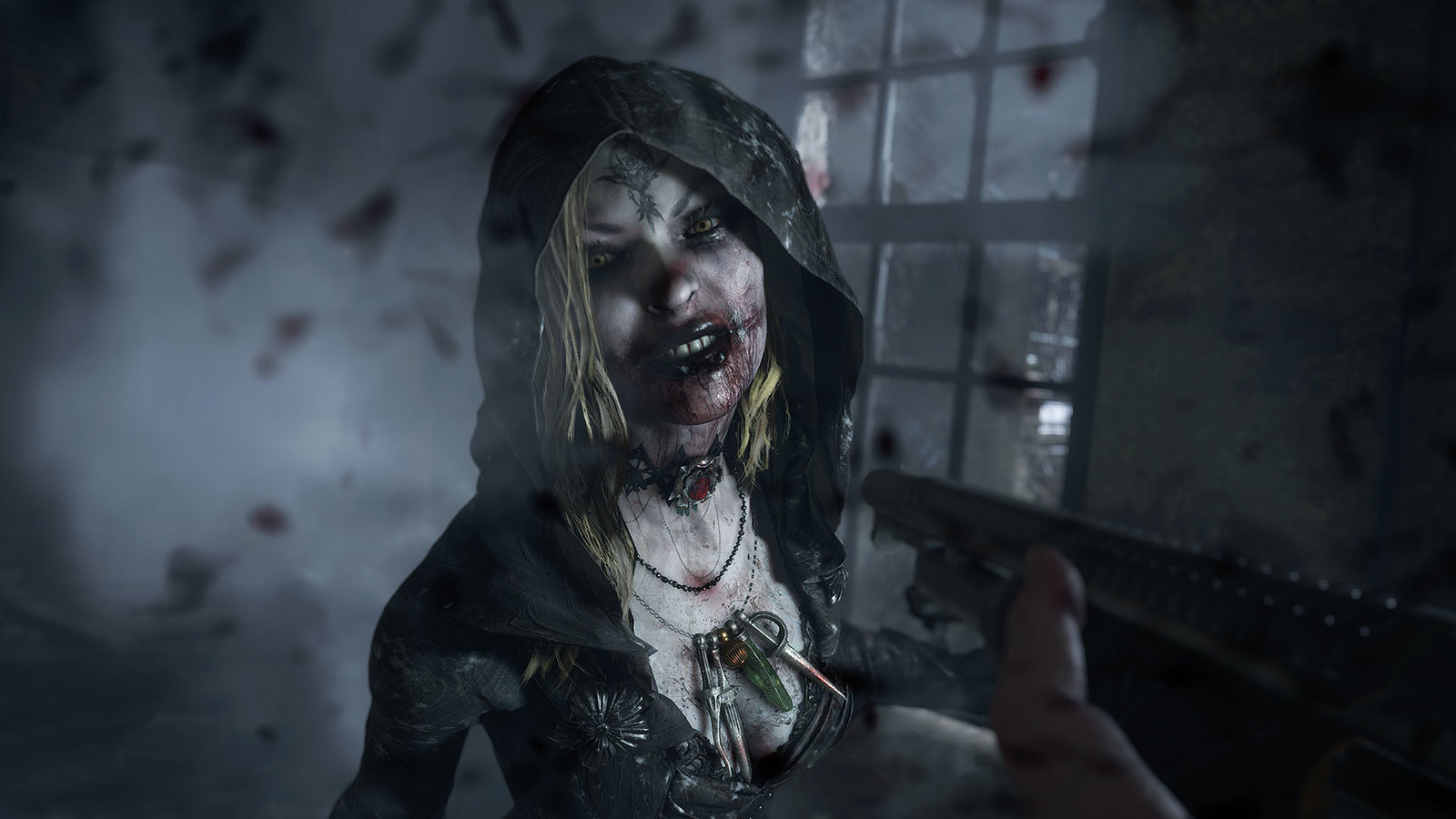 Which daughter poses the greatest danger to Ethan?

Sato: Each daughter is just as much of a threat as the other. Each daughters’ personality conveys a different sense of danger and horror. We’ve made each daughter her own blend of beauty and horror, so I’ll leave it up to the player to decide which one fits their own preference in survival horror.

Do any of the sisters suffer from jealousy from each other?

Sato: Every daughter looks up to their mother, Alcina Dimitrescu, and loves her wholeheartedly, so in some sense, you could say that their constant fighting amongst themselves to see who is worthy of receiving their mother’s love. 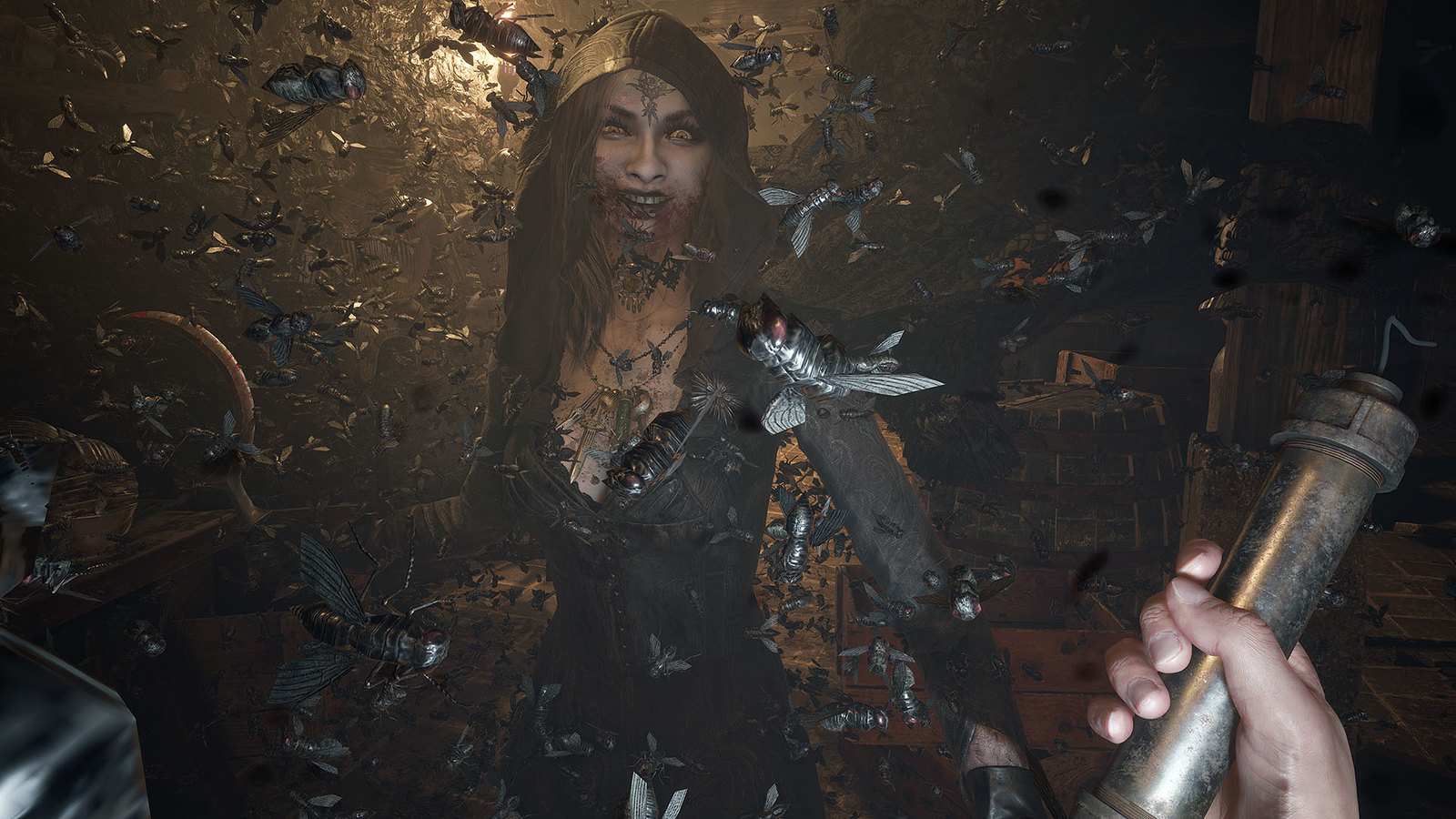 What about the daughters makes them fit into the Resident Evil universe?

Sato: They present psychological horror with their maniacal personalities, and also present physical horror through their unnatural bodies comprised of many different insects merging together. I think an antagonist has to have both of those scare factors, both mental and physical, in order to be a fitting villain in the Resident Evil universe.

Why do the daughters perfectly embody the survival horror aspect of Resident Evil Village?

Sato: Since they’re composed of a multitude of insects, normal attacks won’t faze them. It forces the player to strategize and figure out how to defeat them. That strategic, puzzle element of combat, along with the desperate need to survive, is why I believe they are a perfect fit for the world of Resident Evil Village.

The daughters are reminiscent of classic gothic horror vampires. What was it like walking the line of gothic and modern horror?

Sato: You’ll find that many of the enemies that appear in Resident Evil Village are inspired by many figures you might find in classic or gothic horror. However, in order for them to make sense in the Resident Evil universe, it was imperative that the daughters be “living beings”. No matter how supernatural something may appear, there’s always some kind of scientific explanation as to why things are happening. This approach isn’t just specific to Resident Evil Village, but the franchise as a whole, and was something we were sure to address. When we were constructing the narrative and the full scope of the game, it was an aspect that we were very conscious of.

How did the early design concepts for the daughters differ from how they appear and act in the final game?

Takano: Since we had utilized vampires as the original motif, the original drafts had enemies who would gain strength by drinking blood. There were also ideas of the daughters mummifying without a constant supply of blood. The concept was fun, but at the same time, there was a strangely comical nature to the expression, so it was ultimately axed.

From there, we had the idea of having them fly by having wings spread out from their heads. It’s the basis for some other enemies you may find in the game. However, one of the orders that we had to deliver on was making sure that the daughters came across as “bosses.” As such, this concept was also scrapped since we needed a stronger differentiation between them and the more common foe. 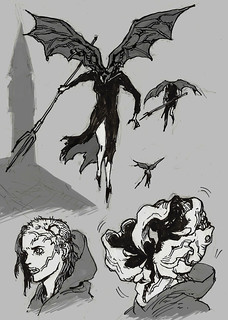 One of the first concepts regarding the daughters that stuck around till the very end was that they wouldn’t be able to be defeated through normal means, so we ultimately finalized their design as being a swarm of insects.

What mix of emotions do you want the daughters to evoke from players when they encounter them?

Sato: I want players to think, “I hope they don’t show up” while investigating the castle. On top of that, I hope players feel a range of conflicting emotions. If some players think, “They’re strong and scary… yet they’re beautiful,” then we accomplished what we set out for.

Can you share any specific insights to the various pieces of concept art or in-development versions of the daughters provided?

Takano: We had experimented with a lot of different variations during the initial development stage. At one point they had giant scissors. Another design had them with leech-like long tongues. Yet another time, they wielded whips. 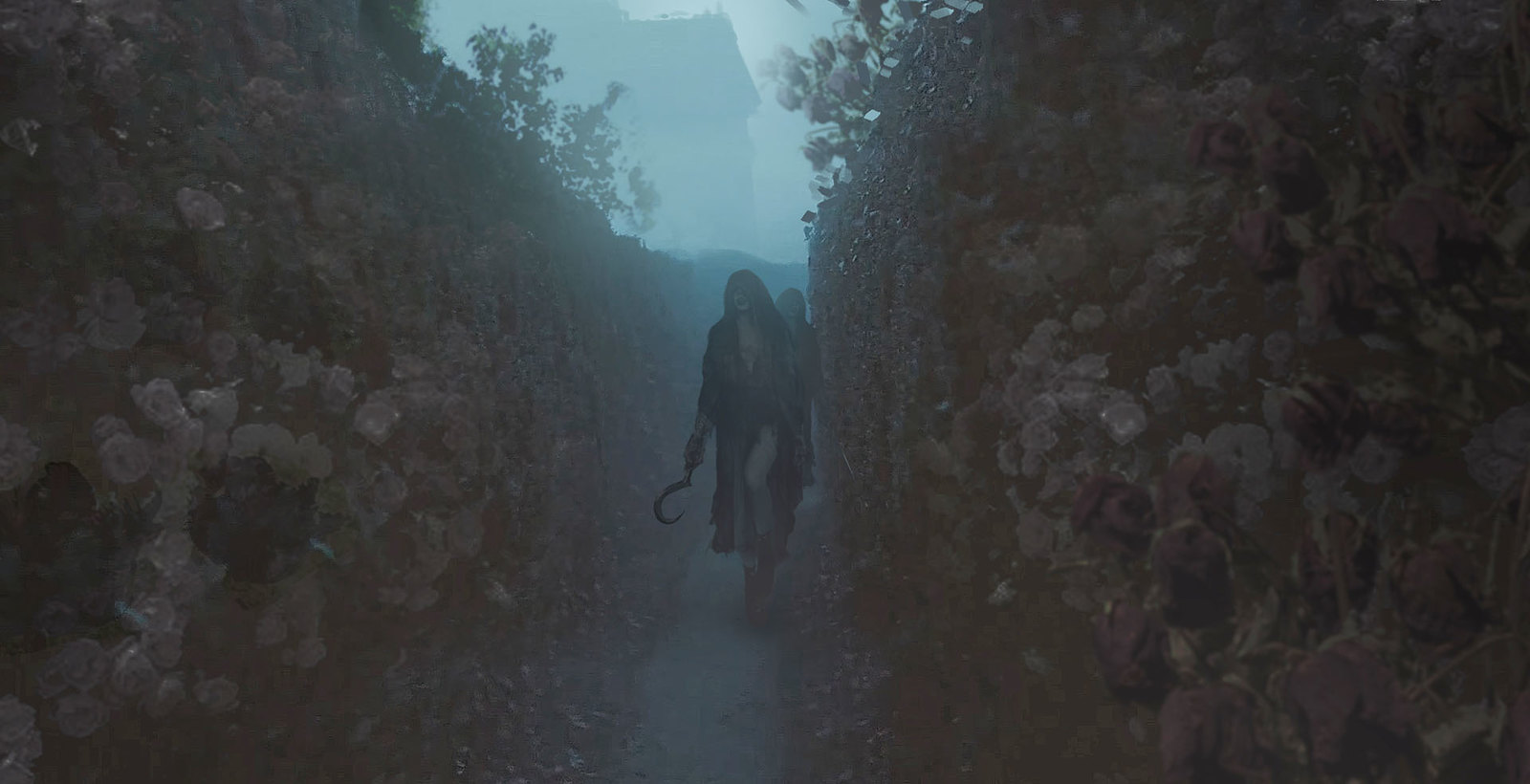 Early development concept for the daughters

There was also a point in time where it wasn’t a trio of sisters, but dozens upon dozens of sisters inhabiting the castle, all ready to feast on Ethan’s blood. However, after trial and error and testing the game’s tempo, the Dimitrescu family was ultimately decided to be Alcina Dimitrescu and her three daughters. Fun fact, the Dimitrescu family feeds off male blood to stay alive, so those poor males who fell victim to them can be found crucified outside Castle Dimitrescu. 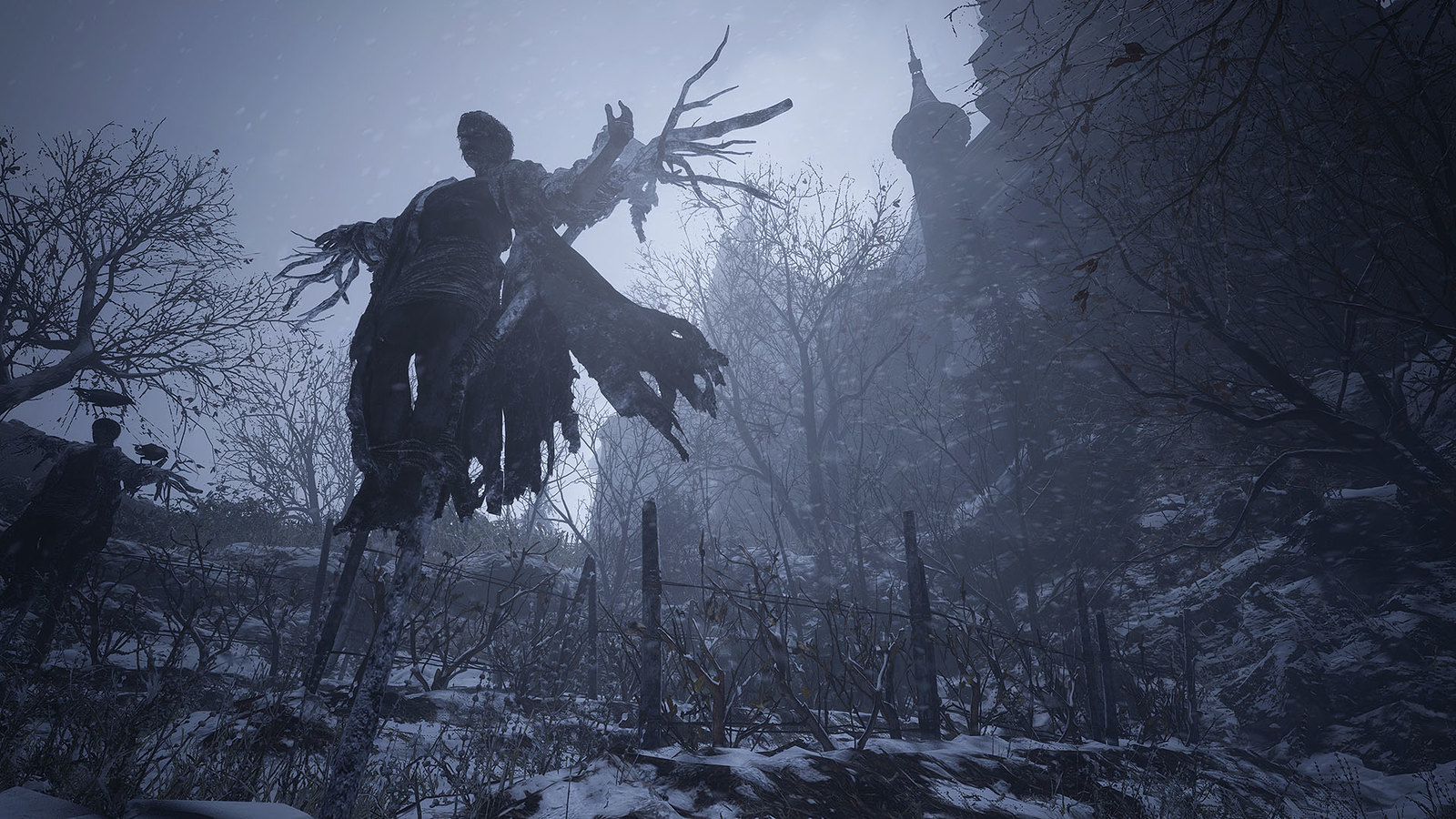