Your unmanned space shuttle crash lands outside Colony 21, where you’re supposed to make some desperately needed repairs. Unfortunately, the planet has a bit of an alien problem and the locals aren’t too friendly — so you’re going to have to use your heavy, mighty wrench to adjust some attitudes as well as repair machinery, fighting through five different Biomes, each with three stages.

Blurt all the blustery bravado you want but  be prepared to die. A lot. (Hopefully, you’re getting paid overtime for this.)

Your core fighting abilities are smashing with a wrench and dashing to thread your way through enemy fire and avoid attacks in general. The dash ability is essential to survival, and it can be improved and modified through various power ups as well—making you briefly bullet proof or inflicting damage on enemies, for example. And as your skill improves and you get a few upgrades for that wrench, you’ll definitely feel the thrill of splattering enemies as ‘Run Punch Man’.

While wrench-bashing is thrilling and a wrench never runs out of ammo, don’t worry — there is still plenty of shooting. You’re also equipped with a humble pistol and more weapons and power-ups are waiting to be uncovered. Fighting your way deeper into the Colony, you’ll find numerous upgrades and new weapons, such as an auto-aiming sniper rifle and a ricochet gun that fires bouncing bullets (excellent at clearing rooms). And that’s just the beginning.

If you think fighting during the day is hard, wait until nightfall. Day and night cycles are a regular part of the game, and when night falls on Colony 21 your visibility is reduced, leaving you to guess at what might be lurking in the shadows waiting to shoot you in the face, eat you, or generally dampen your day. Get ready for even more intense, frenzied battles while you scramble to survive Colony 21’s exciting nightlife.

While you’re fighting your way through enemies, your primary quest is to repair Colony 21. Each section requires different items (artifacts) that you must find in order to fix it. In addition, once an artifact is acquired and a section is repaired, you will gain access to new passive buffs — but choose wisely! Upgrade stations only allow you to choose one of three randomized options.

Throughout your battles you can also find and unleash robot ‘pet’ companions that can add some ridiculously devastating firepower to your arsenal. (If you see an egg, grab it to unleash the pet and enjoy the carnage!)

Power up and press onward

As Space Robinson ramps up its considerable challenge level, you will also earn experience points and level up to help meet those challenges. Gaining levels allows you to choose from various upgrades such as more health, increased damage, and more. New weapons and modifications also await. Want your wrench to freeze enemies and unleash a hail of bullets? You can.

Space Robinson is a classic roguelike shoot ’em up available now in the Xbox Store for Xbox One and Xbox Series X|S. 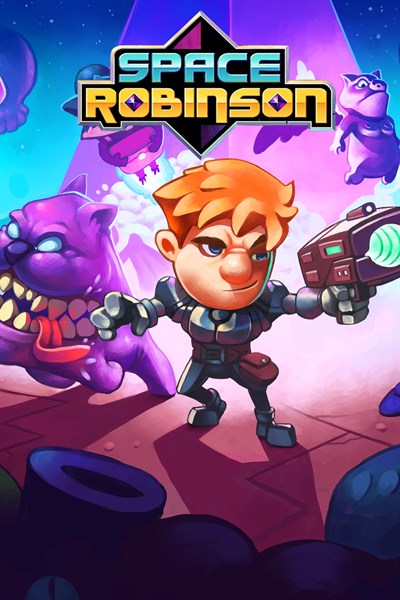 ☆☆☆☆☆
7
★★★★★
$9.99
Get it now
Survive the unforgiving world in the action rogue-like adventures of Space Robinson.
After crashing into an abandoned colony base overrun with hostile life, you must find a way to survive the elements armed at first with only a gun and wrench. Find friends and upgrade your way to victory.

Challenges
Take pride in the game’s challenging design. Death is just a part of the true hardcore rogue-like experience afterall. But worry not, you’ll keep many of the precious resources you collect during your adventures when you respawn back at the base, others you will need to venture out again to recover.

Get Allies
Summon a raccoon, dog, or flying pig to help you venture deeper into the depths of the unforgiving world. These brave beasts are your only friends in the world, literally.

Fresh Gameplay
Procedurally generated levels with day and night cycles that will present new challenges for you to conquer. So hopefully you're not afraid of the dark.

Craft and Upgrade
Collect crystals, artifacts, and level up as you play. Upgrade, craft new weapons, and repair the colony units to increase your chances of survival.