The Smite mid-season update featuring the Stranger Things Battle Pass is available now on Xbox One and Xbox Series X|S!

Instantly unlock Hopper Apollo by purchasing the Battle Pass, or buy the Battle Pass Plus to unlock everything up to The Demogorgon Bakasura. Every Smite player earns rewards just for playing Smite. Begin leveling your Battle Pass on day one and unlock free rewards like the Demogorgon Avatar. That’s not all! After completing the Premium Track, unlock the Prestige Track featuring 60 extra levels of goodies and a special ’80s mall-themed Starcourt Eleven Scylla!

This epic crossover doesn’t stop there! “Stranger Things’” trademark Upside Down has seeped into the classic Arena Map. As you roam around the map, you’ll notice the updated skybox – now a dark, gloomy sky with The Mind Flayer looming over the battleground. You’ll also find fun “Stranger Things” callbacks like Christmas lights on the walls. Be sure to take a closer look to see if you can find any secret messages.

The mid-season update also includes the Ocean’s Fury conquest map update, significant balance changes to gods and Items like the removal of boots, and the Court of Midnight event featuring Morgan Le Fay’s first skin, Crimson Magus. I hope you all log in to claim your Smite x Stranger Things Starter Pass, and check out all the incredible content. Our team has worked so hard on the mid-season update and I can’t wait for you to try everything! See you in the battleground. 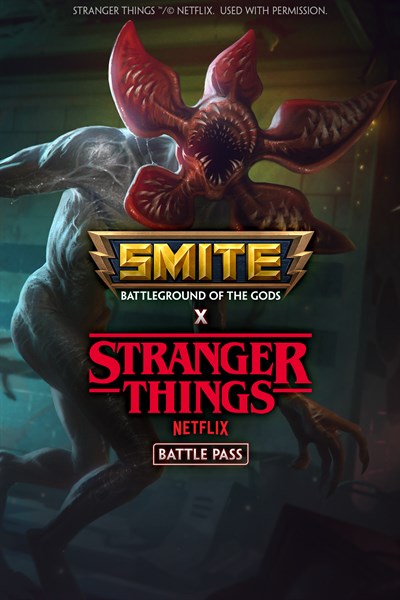 The Stranger Things Plus Bundle is the best way to get started. Instantly unlock Hopper Apollo, The Demogorgon Bakasura, and all rewards up to level 25. Plus: you’ll get all four Gods featured in the pass, and their Voice Packs!

Join 35+ million players in SMITE, the world’s most popular action multiplayer online battle arena. Become a legend of myth, enter the Battleground of the Gods, and play FREE now!

100+ Gods
Unleash each deity’s unique strategies, legendary weapons, and earth-shattering powers. Rain lightning down upon your foes as Zeus, assassinate from the shadows as Loki, or transform and trick your foes as the Monkey King, Sun Wukong. Which God will you choose?

Unique Perspective
Unlike other MOBAs, SMITE puts you directly onto the battlefield with a third-person action viewpoint. From blind-side ambushes to aimed shots, a new pantheon of strategic possibilities awaits.

Become Godlike
Never played a battle arena before? Don’t worry. Auto-buy, auto-level, and the deathmatch-like Arena mode let you jump right into divine MOBA action. Aspiring pro? Top the ladders, join a competitive team, and you too could be playing at the SMITE World Championship.