Our passion for adventure games precedes everything. When we decided to develop The Wardrobe, we had the goal of making a video game that could draw inspiration from the masterpieces of the genre, such as Monkey Island, Day of the Tentacle, Sam & Max: Hit the Road, and so on, but making it modern, putting in some black humor. This is how The Wardrobe was born, talking about two friends that not even death can keep away.

Our protagonist is Skinny, a boy who was killed by mistake from his best friend, Ronald. After the accident, Skinny’s body was brought back to life by some mysterious entity, forced to live forever in Ronald’s wardrobe. Like a skeleton in the closet. To save his best friend’s soul from eternal damnation, Skinny will be forced to reveal himself to Ronald and convince him to face his guilt.

It’s easy to understand, in short, that we wanted to create something very particular, with a story that allows us to work a lot with the dark humor mentioned above. But above all, we wanted to make The Wardrobe a game that makes quotations its strongest part: there are many references to pop culture and geeks, so as to make the generations of the 80s and 90s happy.

We’re arriving on the Xbox consoles four years after The Wardrobe‘s first release, which took place on Steam and Switch. Initially, our development focused on PC and the Nintendo Switch, which was then ported the following year, because the adventure game genre has always been connected to a computer. In recent years we have realized that these categorizations no longer exist, and gamers want to try everything everywhere. The same adventure games have arrived on Xbox in recent years and with great success, so we said to ourselves, “Why not?”

We’re now committed to our next game, which we have been developing since 2019 and we would like to conclude in the coming months, so that we can enter the gold phase for the fall of this year. This will also be an adventure game, but with the addition of some competitive elements, which will allow us to create a completely new sort of sport, made up of power ups, skills, special abilities and characters to customize. It’s called Extra Coin and this time we will take care to make it arrive as soon as possible also on consoles, after the first release on Steam.

This time the black humor will be put aside a bit, because the goal is to focus on a more emotional story, centered on abandonment and virtual worlds, poised between a second life and alienation from the real world. 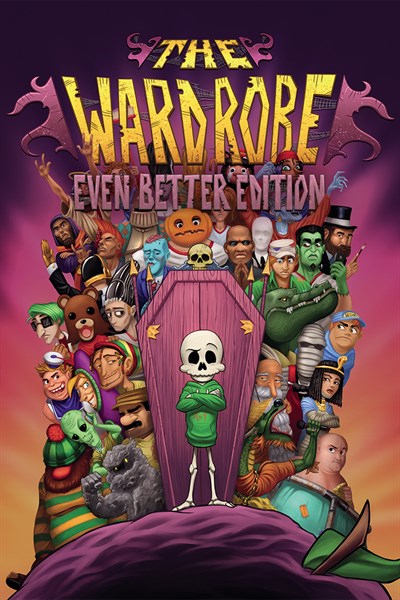 The Wardrobe: Even Better Edition

☆☆☆☆☆
3
★★★★★
$19.99
Get it now
The Wardrobe: Even Better Edition is a tribute to the awesome geekery that was born in the last four decades, and to the classic 2D point-and-click adventures from the ‘90s.
Each dialogue, scene, background, or item in the game pays homage to the nerd and pop culture you grew up with; from the most evident reference to the most hidden ones.

The game is a 2D point-and-click adventure inspired by pillars of the genre like "Monkey Island", "Day of the Tentacle" and "Sam & Max: Hit the Road".
It is stuffed with dozens of funny characters and places, a crazy atmosphere, a pinch of dark humor, and lots of puzzles to solve.
If you loved Guybrush or Manuel Calavera then you’ll be happy to meet Skinny, the main character overflowing your adventures with sarcasm, cynicism and breakthroughs of the fourth wall.

Skinny is a young boy who was accidentally killed by his best friend, Ronald.
After the murder, Skinny’s dead body is brought back to life by mystical forces, which bound him to live forever in Ronald’s wardrobe—now, that’s what I call a skeleton in the closet!

To save his best friend’s soul from eternal damnation, Skinny will need to reveal himself and convince Ronald to face his guilt.