Hey everyone – we’re just days away from the launch of Ratchet & Clank: Rift Apart on the PlayStation 5 console. It’s been quite a journey to get here, as our team has been working on creating a showpiece for the new hardware. Built from the ground up for PS5, Ratchet & Clank: Rift Apart is, in my humble opinion, one of the most beautiful and technically impressive games ever released.  I know the rest of the team here at Insomniac feels the same way.

Over the years we’ve worked on a lot of Ratchet & Clank games. When I think back to those games on the PS2 and PS3 consoles, it’s amazing how far we’ve come. We made a video to show the evolution of things over the franchise, take a look:

I’ll never forget being a college freshman, working as a freelance journalist and getting an early preview build of the first Ratchet & Clank. Sitting in my dorm room exploring planets with a lombax and his robot companion made an immediate impression on me. I anxiously devoured the future builds, and it was one of my favorite franchises on one of my favorite consoles of all-time. 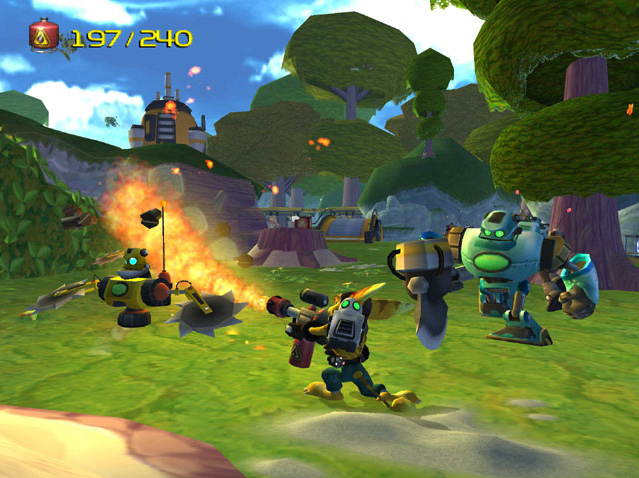 On the PS2 console, Ratchet & Clank did what it always does: be a showpiece for your console. The games, Ratchet & Clank, Going Commando, Up Your Arsenal, and Deadlocked, were gorgeous, technical showpieces for the console with huge vista views and draw-distance, incredible action and weapons, and amazing heart and humor. 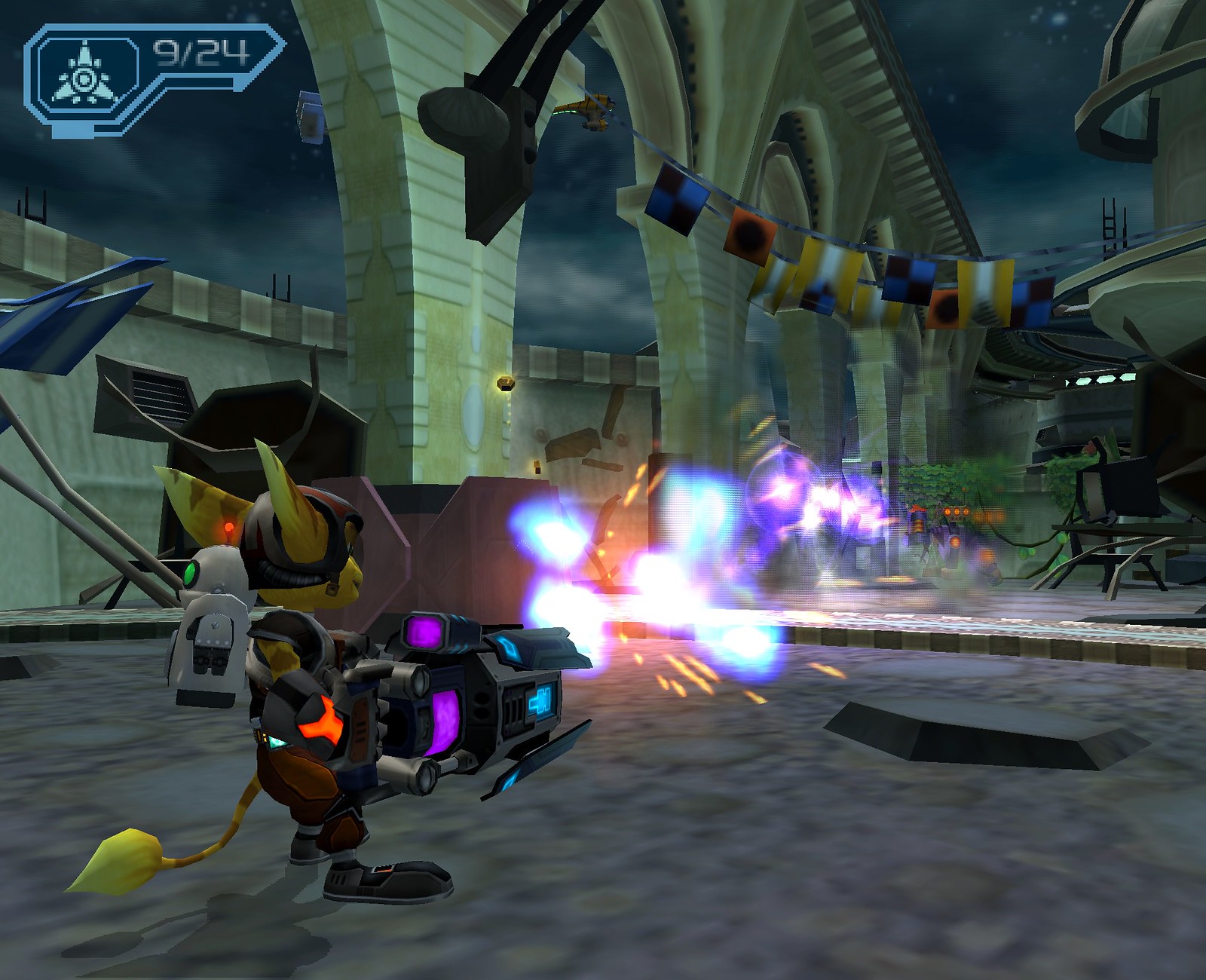 Out of college I got a job at Insomniac Games and I got to start working on a game codenamed as Ratchet & Clank Future. It was my first Ratchet & Clank game, and Insomniac’s first one for the PlayStation 3 console.

We were finally starting to hit the visuals of CG-animated films at the time and taking advantage of the Cell processor and horsepower in the PS3 console. But we also began at this point to really take the story in a more heartfelt direction like those animated films we loved. We dug into Ratchet and Clank’s backstory over the Future Saga and the seminal A Crack in Time remains many fans favorite game in the franchise. 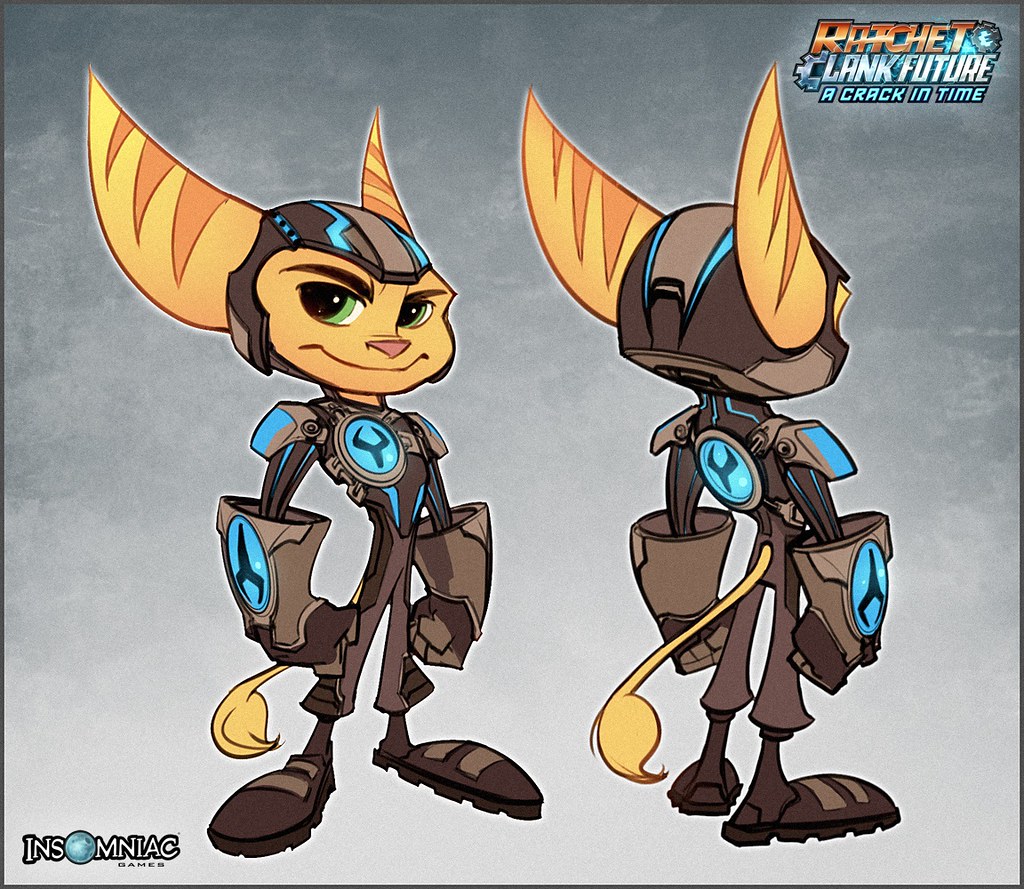 We also experimented down the stretch, with the 4-player game, All 4 One, and a multiplayer / tower defense game: Full Frontal Assault.  We continued to work on refining the mechanics and polishing our action and gunplay. 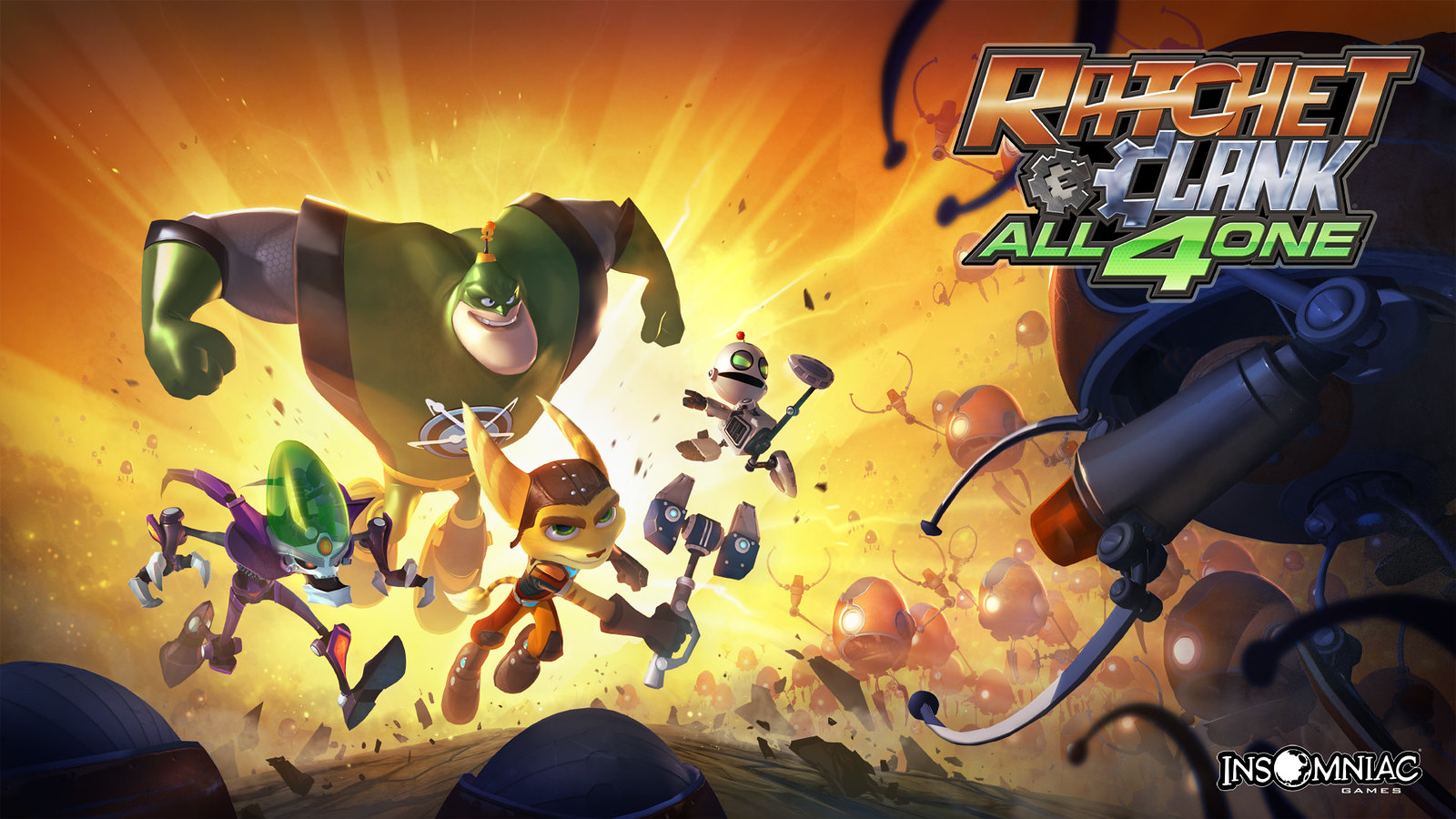 Which all came together on the PS4 console. A CG animated movie gave us the opportunity to make a game based on a movie based on a game. This re-imagined version of the original (told from Captain Qwark’s point-of-view) is a visual-tour-de-force. It allowed you to play through the origins of the characters but with years of experience in designing combat and weapons, and with amazing visuals that showed what the PS4 console was capable of. 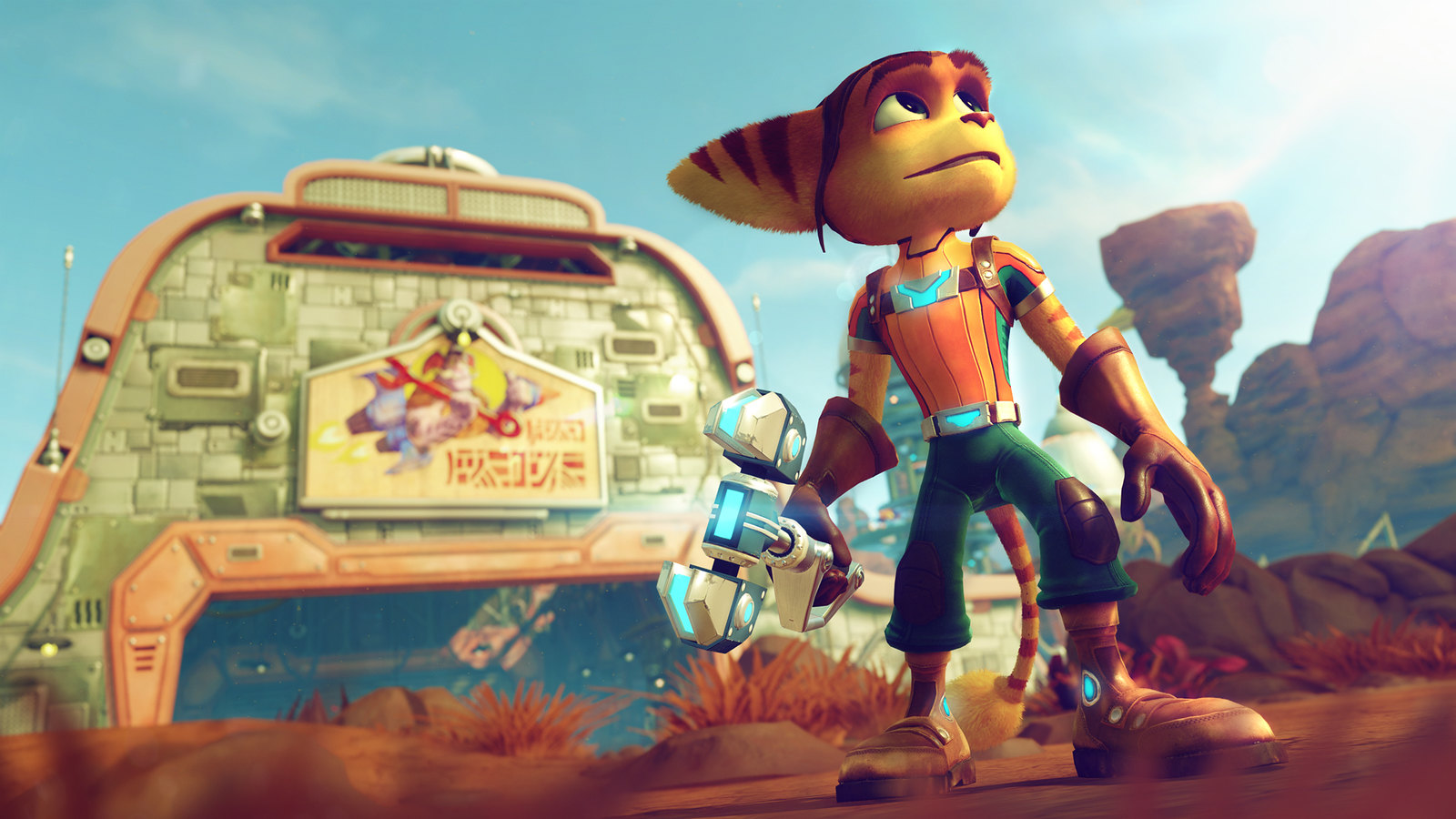 With our next standalone entry in the Ratchet & Clank franchise, Ratchet & Clank: Rift Apart, this title was built from the ground up and designed exclusively for the PS5 console. The speed of the SSD allowed us to consider dimension hopping and portals that would whisk you across the galaxy. The power of the console let us give you our most visually spectacular Ratchet & Clank game yet. The DualSense wireless controller’s haptic feedback and adaptive triggers brings Ratchet and Rivet’s arsenal to life in a whole new way. And all of the years of storytelling in the Ratchet & Clank universe allowed us to create a heartfelt story about friendship and overcoming all odds.

Looking at the evolution, from the PS2 console in my dorm room on a 13″ screen TV – to now Ratchet & Clank: Rift Apart – in glorious 4K HDR* with ray-traced reflections and 3D audio in my headphones, it’s been amazing to see the way two best friends have evolved right alongside the console.

For those of you who have been fans over the years – you’ll notice a lot of easter eggs in the video. Swag and rare Ratchet & Clank artifacts dot the rooms, many of these items come from my personal Ratchet & Clank collection. Several more are props from the original TV commercials for the PS2 console (though they have been shrunken a bit for this video!). You might even see some glimpses of toys from other IP that Insomniac Games has created and developed during those timeframes.

One of the things that is most staggering to me about the Ratchet & Clank franchise is that it is coming up on its 20th Anniversary in 2022. Ratchet and Clank are some of PlayStation’s greatest heroes, having debuted on the PlayStation 2 console in 2002, and grown up right alongside the consoles. Many of you have grown up alongside them.  We can’t wait to celebrate the 20th Anniversary next year.

And while I can’t hook you up with all my cool Ratchet & Clank toys – we do have some new ways for you to show your love for the franchise:

We have some brand-new face filters for Instagram and Facebook stories. Turn yourself into Ratchet, Rivet or Clank with these filters. They are hilarious as they are intriguing, invite your friends and family to give them a try! 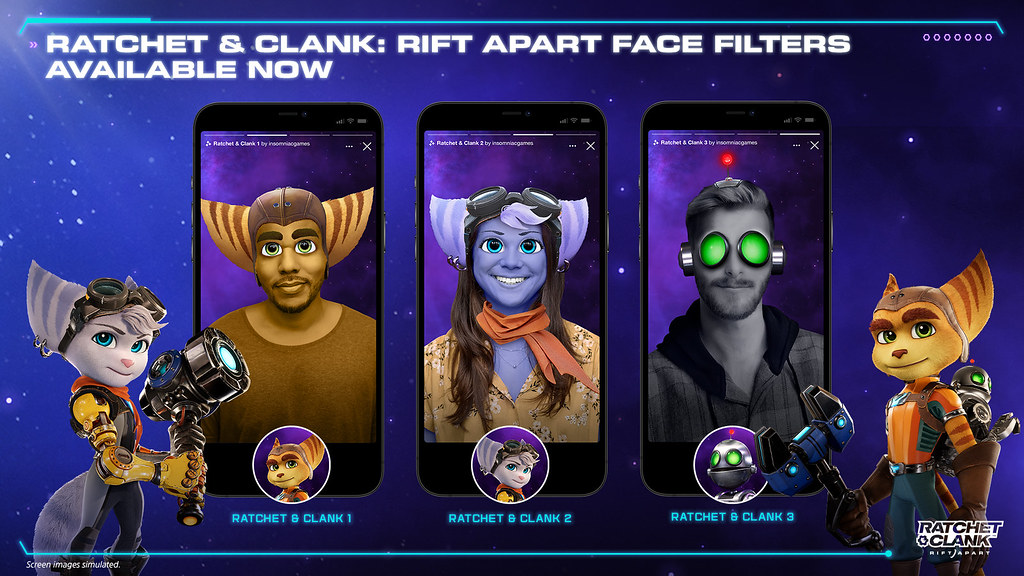 We also have some brand-new Ratchet & Clank: Rift Apart merchandise coming to the PlayStation Gear Store, which ships to select countries**. Here’s a quick peek – and I hope to see you wearing these in selfies or at the next gaming convention when it’s safe for all of us to gather in-person again. Why not share a photo of you wearing these with us on Instagram or Twitter with the #RatchetPS5 hashtag?

That’s all for now – thanks for coming down memory lane with us today! It has been an incredible 19 years, and we couldn’t have done it without all of our amazing fans. We’ll see you on June 11, 2021 when Ratchet & Clank: Rift Apart launches exclusively on PlayStation 5 consoles.