Hello Travelers! This is Genshin Impact’s dev team, and we hope you’ve enjoyed exploring Inazuma in the past month. With Version 2.1 “Floating World Under the Moonlight” coming on September 1, you can expect even more islands and stories to explore in Inazuma, more playable characters to recruit, and more relaxing moments to embrace with our old friends back at Liyue Harbor.

Meanwhile, Aloy, the legendary Nora Huntress from Horizon Zero Dawn, answers the call of adventure in Teyvat and embarks on an all-new journey. If you reach Adventure Rank 20 or above during the Version 2.1 and Version 2.2 updates, you’ll receive the five-star crossover character “Savior From Another World” Aloy and her four-star bow Predator via in-game mail when you log into Genshin Impact on PS4 or PS5.

“Savior From Another World” Aloy

When Aloy traveled to Teyvat, she acquired a Cryo Vision, and became able to use her new powers to enhance her masterful bow and arrow attacks. Her Elemental Burst “Prophecies of Dawn” sees her throw a Power Cell filled with Cryo in the targeted direction, which she then detonates with an arrow, dealing AoE Cryo damage. Not only does her Elemental Skill “Frozen Wilds” and Talents buff herself and her teammates, they also debuff her opponents while dealing Cryo damage.

Aloy’s Frozen Wilds skill throws a Freeze Bomb in the targeted direction and triggers an explosion, dealing Cryo damage. After the explosion, the Freeze Bomb scatters into multiple Chillwater Bomblets that explode on contact with opponents immediately or after a short delay, dealing additional Cryo Damage. When a Freeze Bomb or Chillwater Bomblet hits an opponent, the opponent’s attack is decreased and Aloy receives 1 Coil stack. Each Coil stack increases Aloy’s normal attack damage. After unlocking the talent Combat Override, the whole party’s attack will increase for a certain duration after Aloy gains the Coil effect.

When she has 4 Coil stacks, Aloy will gain the Rushing Ice effect, which lasts for a certain duration, during which her Normal Attack Damage will be converted into Cryo damage. In addition, after unlocking the Passive Talent “Strong Strike,” Aloy’s Cryo damage bonus will constantly increase during Rushing Ice.

Meanwhile, Predator, the four-star bow, can further empower Aloy with its unique weapon effect. When Aloy equips Predator, which she brought from another world, her attack is increased by 66. Dealing Cryo damage to opponents increases its wielder’s normal and charged attack damage by 10% for 6s. This effect can have a maximum of 2 stacks. This unique bow can only be obtained from PS4 and PS5 and can be used on any platforms with the cross-save function. However, the weapon’s effect Strong Strike only applies when playing on PlayStation.

“We’ve been very excited to work with Genshin Impact, especially when we have fans of each other from both teams,” said Mathijs de Jonge, director of Horizon Zero Dawn. “Aloy is a proven agile hunter and warrior who never hesitates to fight for a cause. We can’t wait to see her teaming up with the Traveler who is also from another world to continue their adventure together in the Genshin Impact universe!”

A Grand Finale to the Inazuma Chapter

With Version 2.1, the main storyline of the tumultuous nation of Inazuma will finally come to an end in the new chapter – Omnipresence Over Mortals. In the previous story, the Traveler was defeated in their first confrontation against the Raiden Shogun, and later joined the ranks of the resistance forces. Will the Traveler confront the Almighty Shogun again? Will the Traveler stand a chance to shake the Shogun’s imposing will to pursue eternity and turn the situation around in Inazuma? All will be revealed in the coming Archon quest. 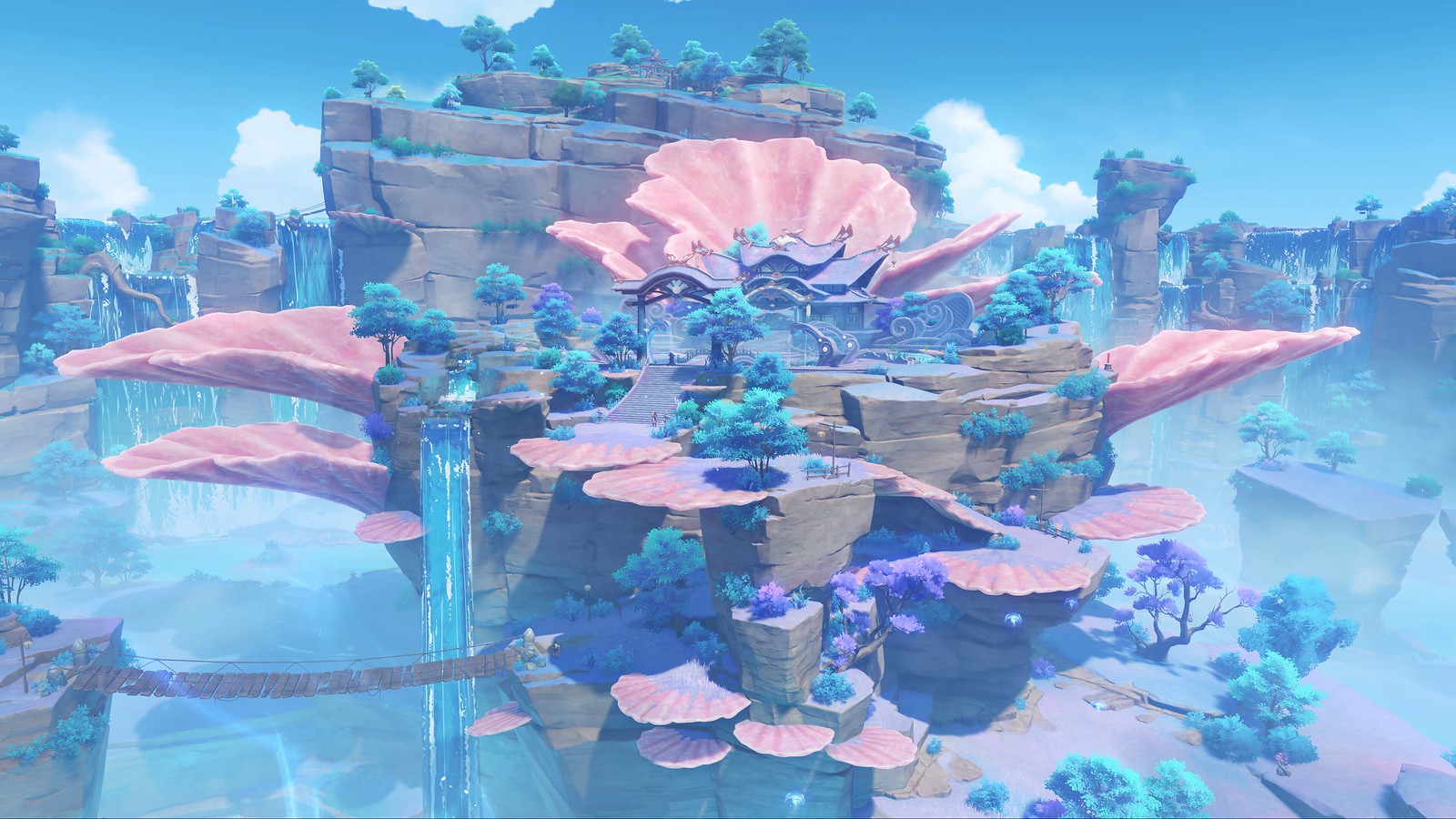 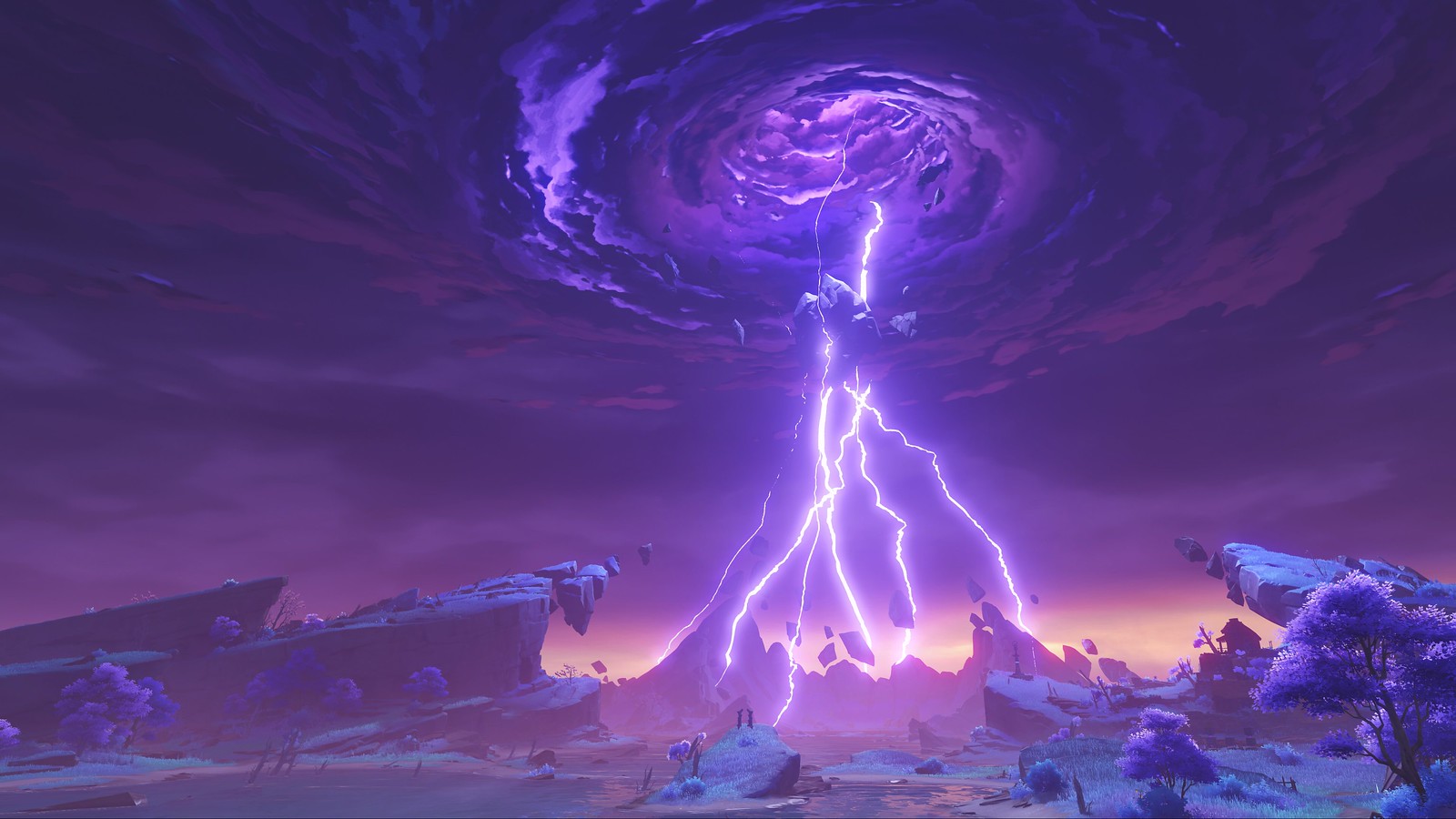 As the story unfolds, two new major islands will be made available to players. The first one is Watatsumi Island, home to the resistance forces. At the center of the island stands the beautiful Sangonomiya Shrine surrounded by mountains and misty waterfalls. The island has a dreamy other-worldly scenery, and in terms of faith, its citizens worship the Great Serpent instead of the Electro Archon.

In contrast to Watatsumi Island, Seirai Island’s atmosphere is bleak, eerie, and gloomy. The island is shrouded in perpetual violent storms, leaving the ruins, abandoned shrines, and withering trees to tell a sad story of the past.

Your journey in Inazuma may be fraught with peril, with a new Trounce Domain boss, Signora, and new boss enemies, Hydro Hypostasis and Thunder Manifestation awaiting you. Signora is a formidable opponent with a noble aura and great power, and the dev team has devoted about eight months in designing this battle. We hope to give this character a very special aesthetic by designing her unique movements and effects in battle, as well as her versatile fighting style to transform between Cryo and Pyro and change the battle environment. 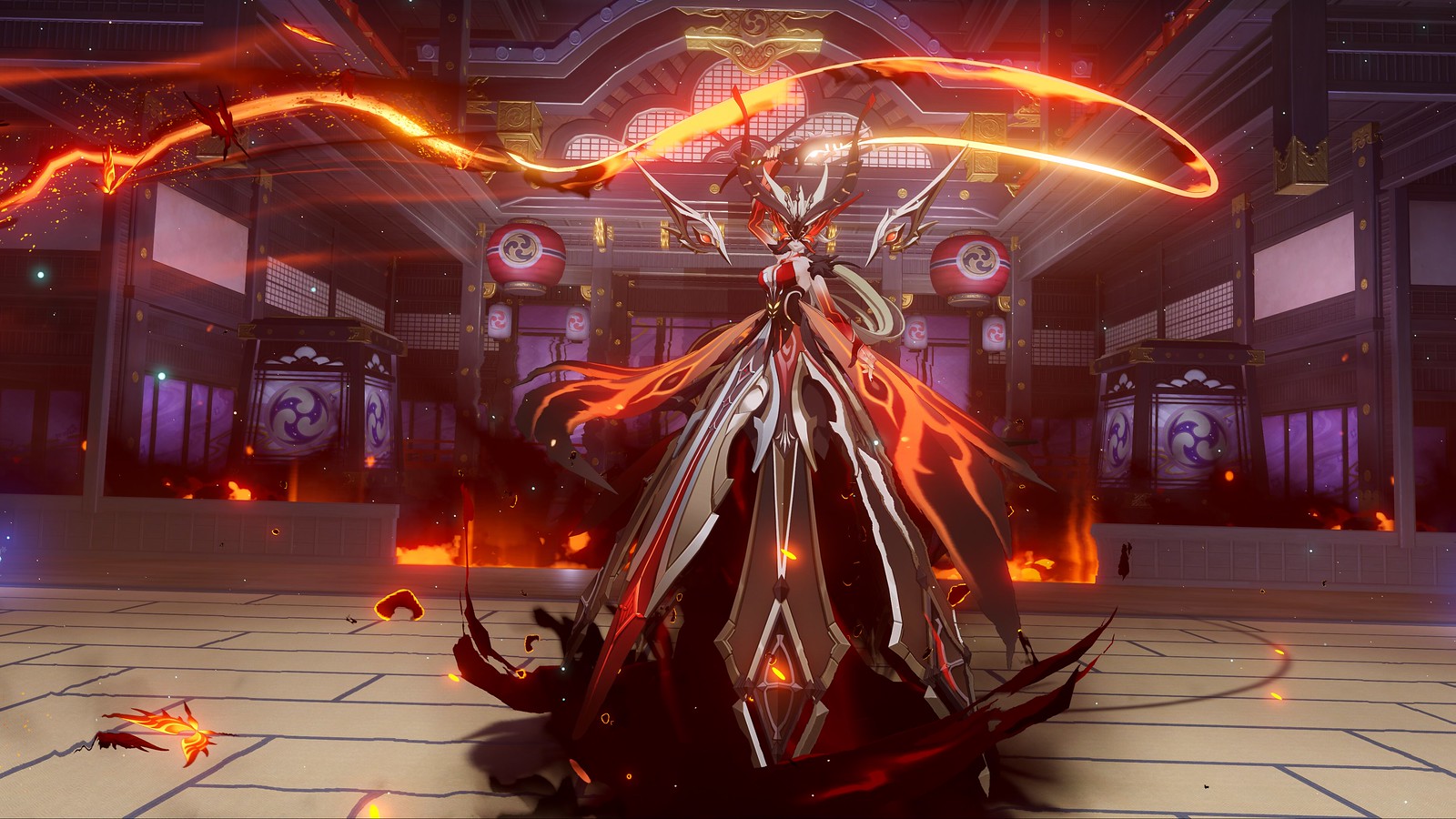 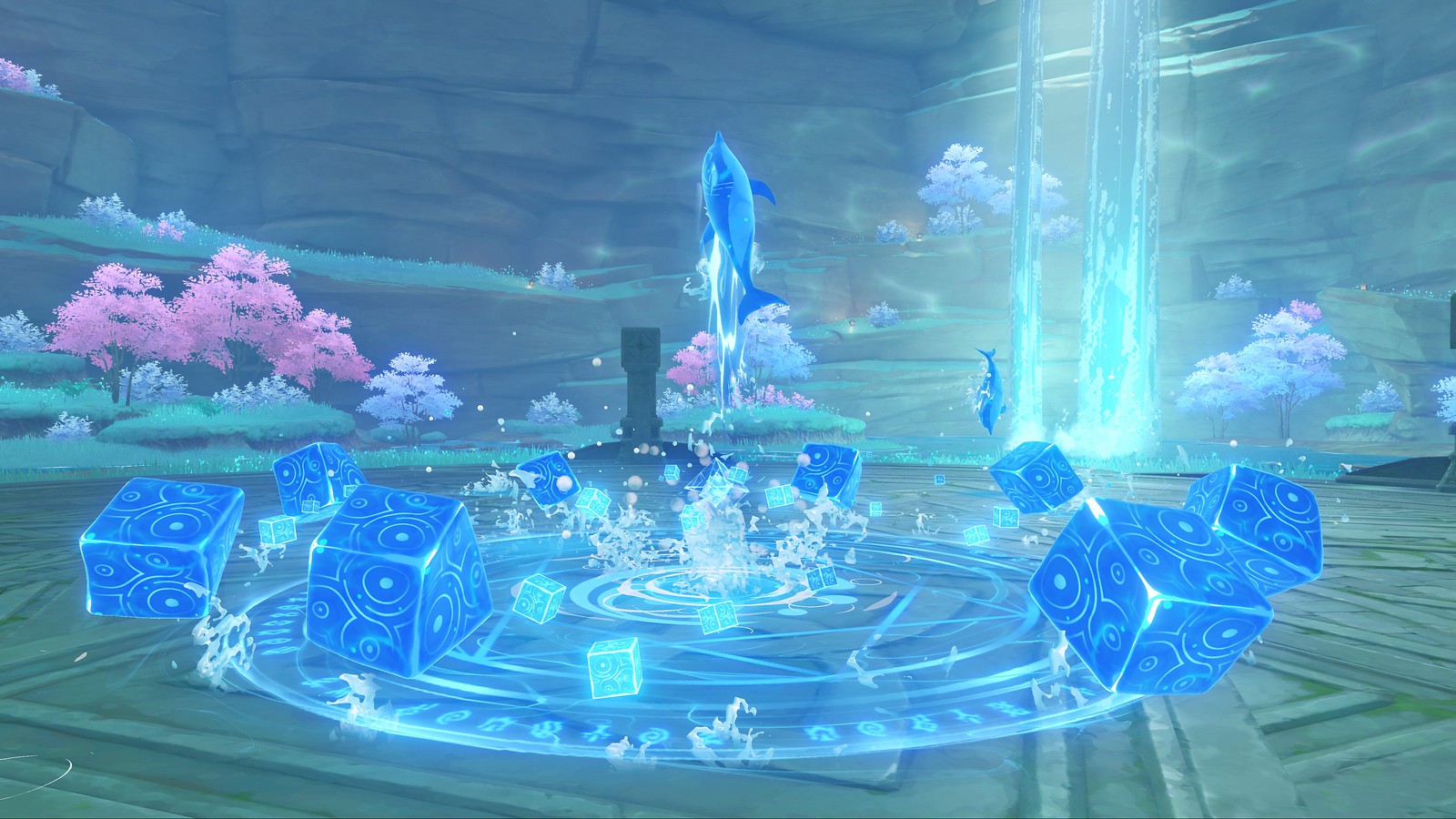 Meanwhile, we’d like to introduce three new playable characters who may become valuable assets in your daily battles and exploration. The Raiden Shogun herself will be joining as a five-star Electro polearm user. When we designed her stance and movements, we wanted to show the calmness, majesty and divine power of an Archon. We also took inspiration from Hassō-no-kamae, sword sheathing, and other actions of Kenjutsu to design her combat movements. 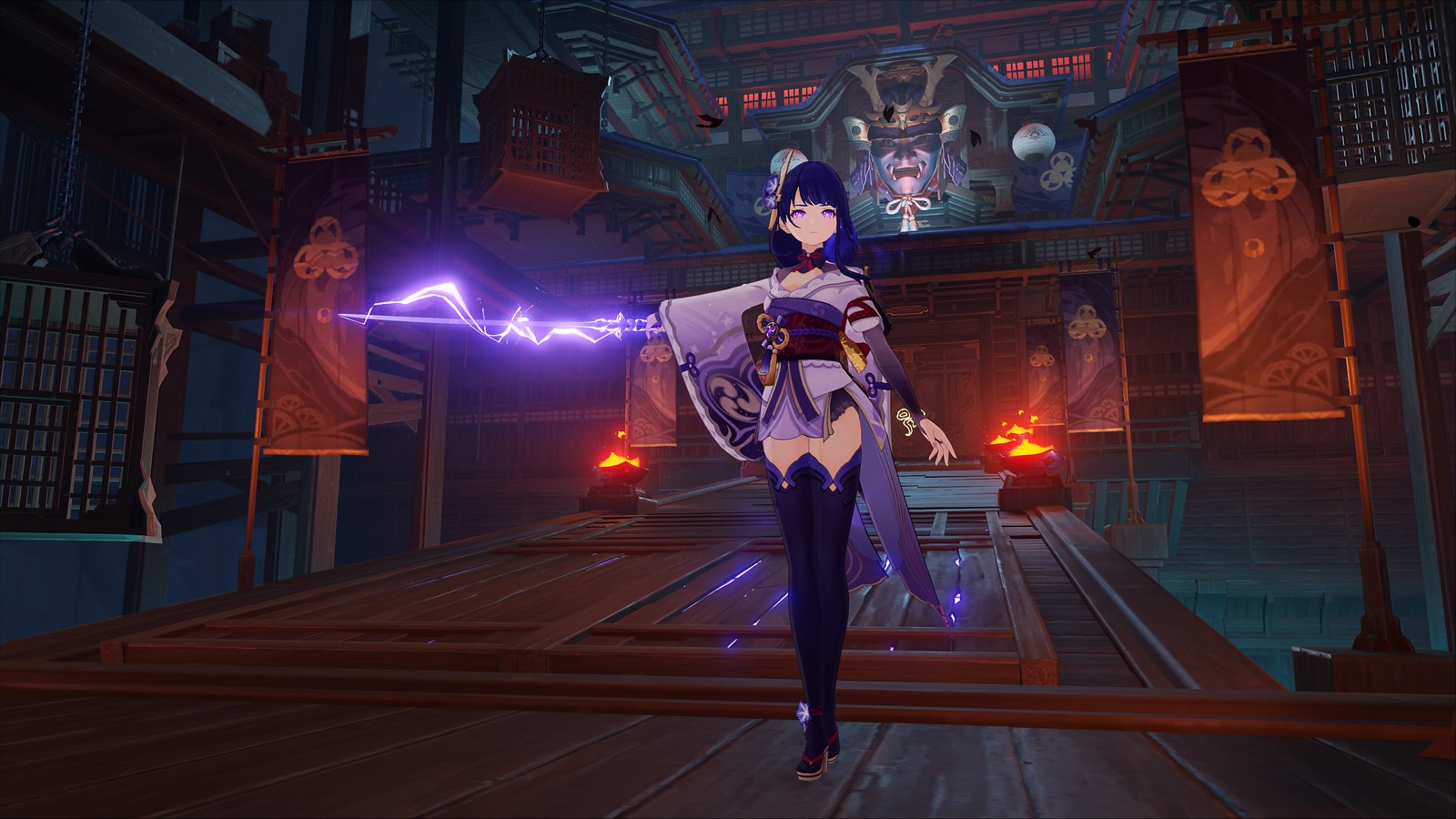 Sangonomiya Kokomi, the Divine Priestess and leader of Watatsumi Island and the resistance forces, will be joining as another five-star character. Wielding the power of Hydro and a catalyst, she can provide a great amount of healing to teammates. Last but not least is Kujou Sara, the bold and decisive general of the Tenryou Commission loyal to the Shogun. As a bow wielder with an Electro Vision, she can deal solid Electro ranged attacks and provide buffs to the team. 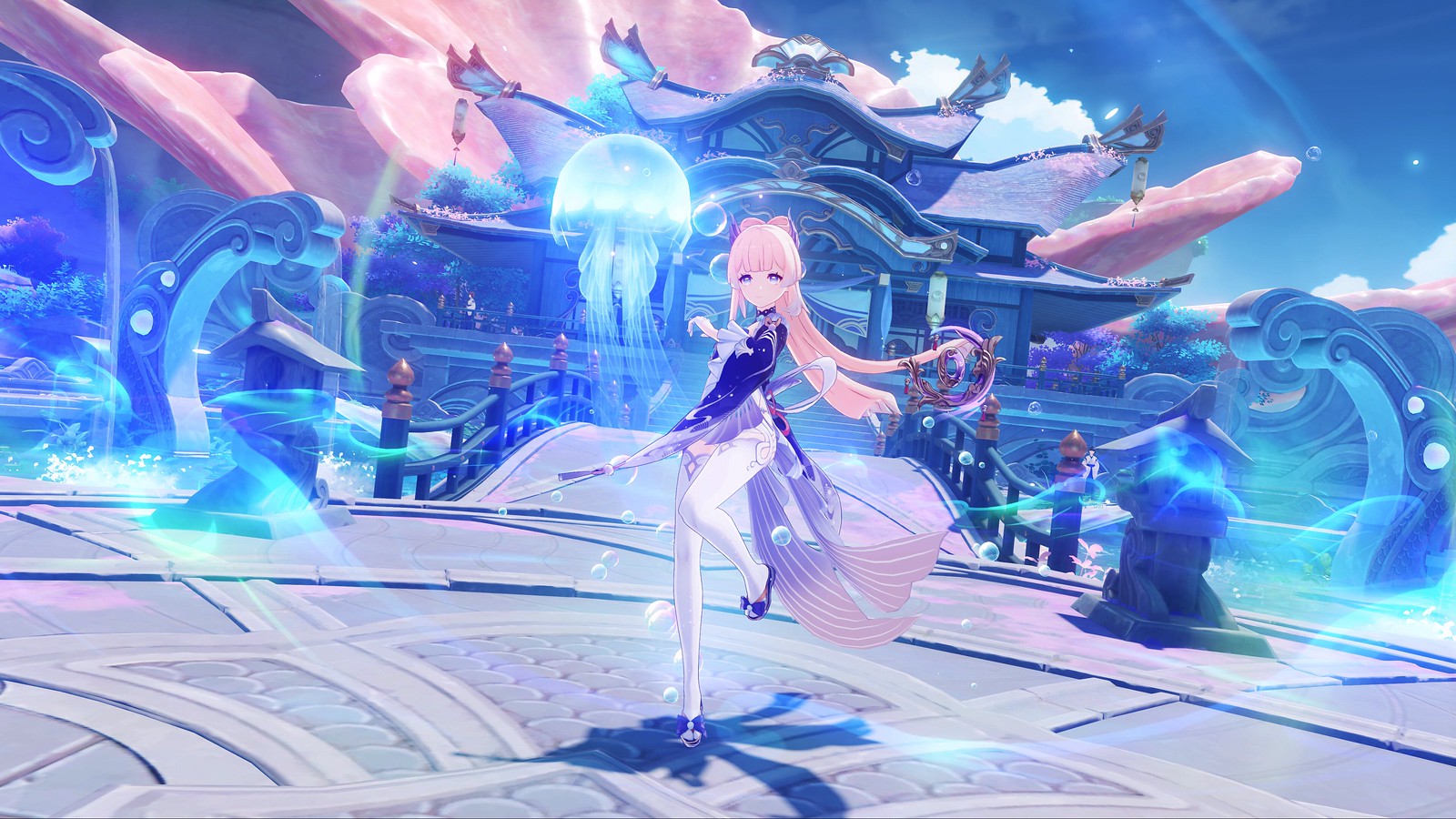 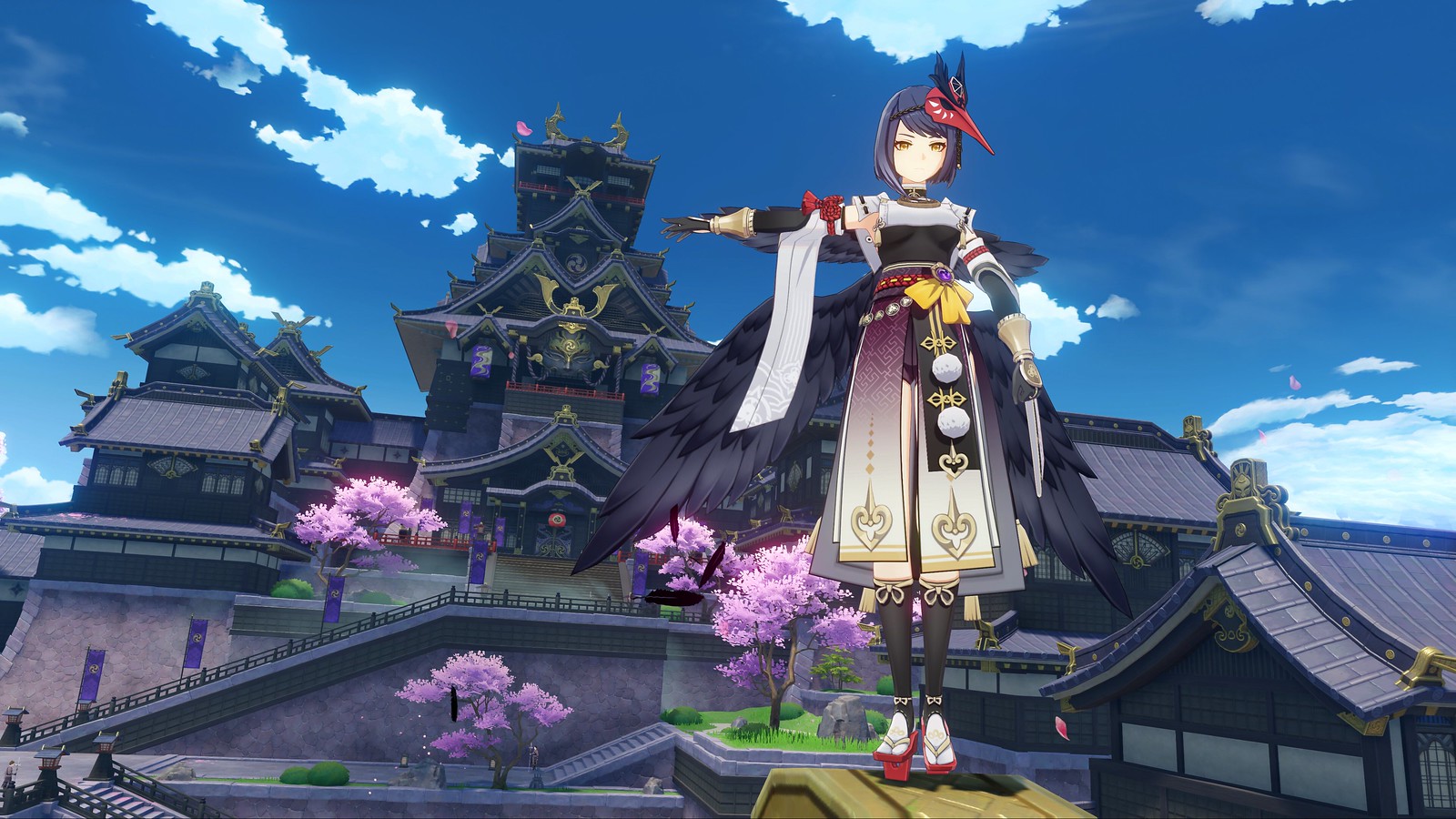 Story quests for the Raiden Shogun and Kokomi will also be available. Players can find out the stories behind these two of the most high-ranking, intelligent, and powerful women in Inazuma.

A Trip for History and Gastronomic Delights

If you want a short break from the intense adventure in Inazuma, you may want to return to Liyue for the Moonchase Festival! In this upcoming seasonal event, you can cook and sample a variety of Liyue cuisine with old friends such as Xiangling and Keqing, and explore the origins of this ancient traditional festival that has been passed down in the bountiful Liyue Harbor for thousands of years. 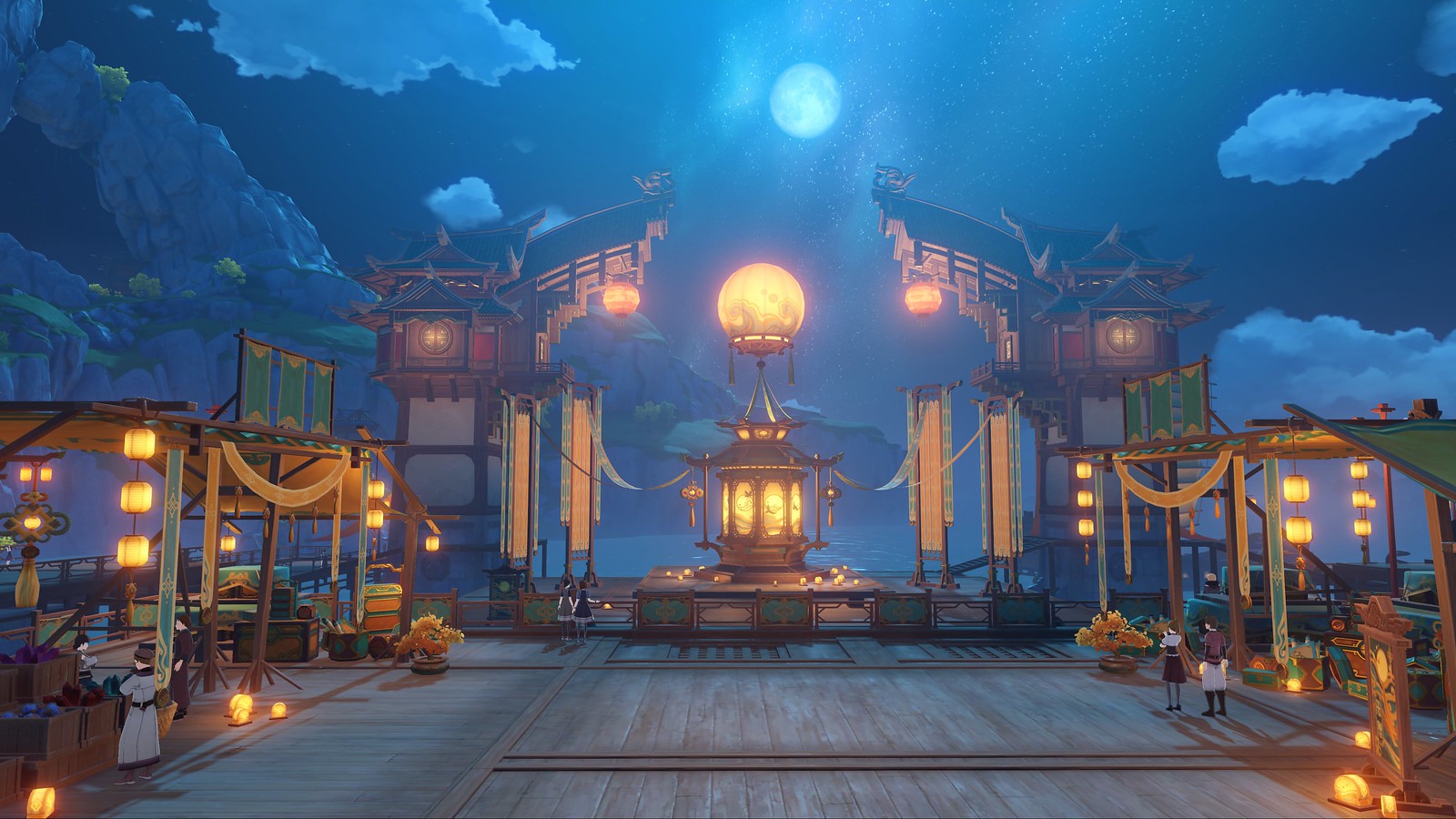 Moonchase Festival is a time when friends and families in Liyue gather around, make a toast, and enjoy local delicacies every autumn. There are different stories about the origin of Moonchase Festival, but with later folklore, food has become one of the most important parts of this festive celebration. Merchants and vendors will also set up various stalls along the bazaar and streets, bringing a variety of delights to the city life during the festival. 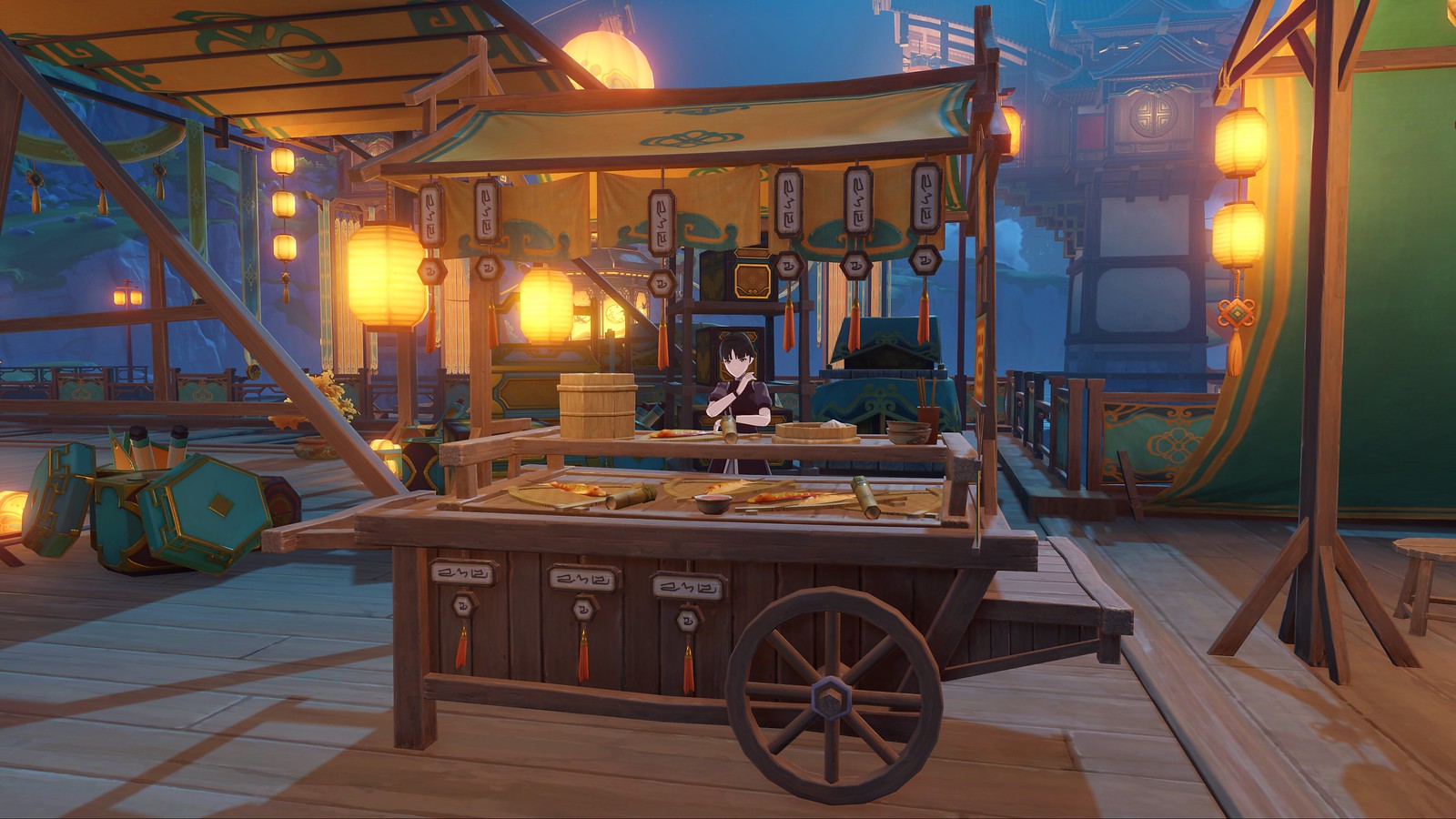 Of course, no celebration is complete without generous rewards and fun games. This time, we’ve prepared a large-scale treasure hunt event — Moonlight Seeker! During the event, the Adventurers’ Guild will be scattering Moonchase Charms and Mystmoon Chests all around the areas of Liyue, Mondstadt, and Dragonspine. Travelers may find clues about their location by speaking with the event organizer, track down every Mystmoon Chest for rewards, and collect Moonchase Charms to exchange for various resources and items, as well as the new four-star claymore Luxurious Sea-Lord up to full refinement.

After the Serenitea Pot, we’re introducing another gameplay system, fishing! Fishes of assorted types vary widely across the continent of Teyvat, and they can be used to produce fish meat, be exchanged for rewards, or redeemed for new fishing rods from the Fishing Association. Special Ornamental Fish can also be caught and raised in the Pool of Sapphire Grace, a brand-new furnishing that can be crafted in your personal realm inside your Serenitea Pot. If you’re confident in your fishing skills, you can participate in the Lunar Realm event and join Kujirai Momiji, the fishing expert from Inazuma, to seek out the legendary fish Lunar Leviathan. 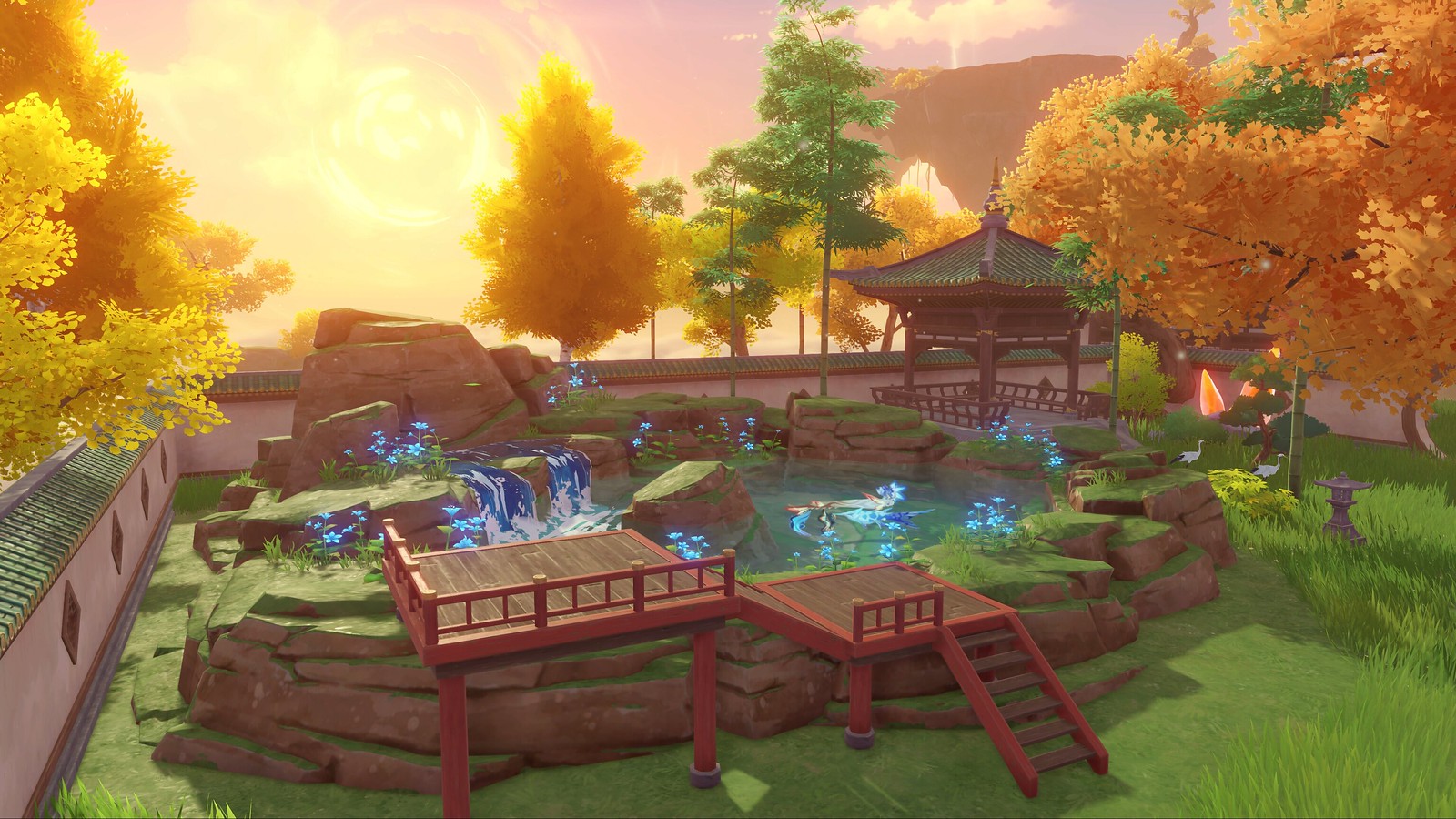 Finally, it’s been almost a year since Genshin Impact was first released last September, and we would like to say a heartfelt thank you to every Traveler who has supported us! To celebrate the upcoming anniversary of Genshin Impact, Travelers can claim up to 10 Intertwined Fate along with abundant resources by participating in the daily login event. Players across all servers will have their Double Crystal top-up bonus reset, which means everyone will be able to enjoy a double amount of Genesis Crystals for their first purchase again.

And that’s it for now, Travelers. We hope to spend another year full of exciting adventures with you.