It’s already August and you’ll soon see why we’ve decided to say goodbye to summer with a bang! By the way, do you know what else is in August? That’s right, it’s our anniversary this week! We’re celebrating our second birthday with style and we couldn’t be happier to share our excitement and gratitude with the community by releasing a new Season packed with a bunch of cool features. But before we go through what Season 9 has in store for you, let’s take a look at what happened during Season 8, shall we?

Season 8 was released back in April when we introduced a group of Outlanders called Trappers who live in harmony with nature and can be identified by their animal face paints and inventive backpacks. We brought in a new Battle Pass with two new packs: the premium Hunter Pack for $69.99 and the Prey Pack for $19.99. We also added a new weapon (the PH M82 sniper rifle) and 2 POIs (Loot Events) in every Encounter! After all of that, update 8.1 in late June saw us introduce Legacy Seasons, starting with Legacy Season 1: Preppers. Besides the Legacy Seasons, update 8.1 also offered the “Thank You Charity Pack”. Some pesky bugs were fixed as well, like the weapon crosshair bloom bug, the bug where your weapon gets jammed after shooting the locked container, the rapid fire glitch, and the compass issue.

Now then, let’s move on to the good stuff!

We heard your feedback and took into consideration your request for a more military oriented Season with darker shades of clothes. That’s why we’re proud to introduce this military/apocalyptic side of the Outlands.

The Stalkers are the children of the apocalypse. They were born to survive the Outlands and you can recognize them by their gas masks, muzzles, rusted weapons, and hauntingly glorious title. They also come equipped with grenades and the formidable A74-KSU, so make sure to shadow them across the land and discover all the enhancements they bring!

Speaking of the A74-KSU, it’s a powerful assault rifle, so give it a shot in the Outlands (literally) and let us know what you think!

The Next Big Thing Has Arrived

Grenades are finally here! We know you’ve been asking for them for a long time and the wait is finally over. Some players might remember when we had them back in the very early stages of the game’s development. But we decided to remove them, do a complete overhaul on them, and re-introduce them once they were ready. And that time is now!

First of all, they are fragmentation or “frag” grenades, meaning that if one explodes close to you, you can die instantly! Since they are a “Special Issue” rarity, you can only carry 2 into an Encounter. They are the perfect tool to force out other players who might be hiding inside a house or at an advantageous point. They can help in situations when you feel like you might be walking into an ambush because you can throw a preemptive grenade. If there’s someone waiting for you, the grenade will definitely get them moving. Now you can go into the Encounters better prepared for these kinds of stalemate situations. Ultimately, they will bring some versatility to the game and will allow players to pursue a faster-paced game style. So make sure to use them whenever you find the opportunity.

You can throw a grenade inside a house through an open window or through glass! You can also choose how you want to throw the grenade. If you’re going for a long throw, an arch will appear to show you the trajectory of the grenade. Be careful of any obstacles along the way though, as the grenade can bounce off objects. You can also opt for a quick throw at close range. In case you’re wondering if an Armor Plate can save you from a grenade, the answer is no! But if someone throws a grenade close to you, the game will show you a warning signal, giving you a few precious seconds to escape the blast range in one piece.

One of the struggles with the development process for the grenades was the fact that we don’t have any animators on the Vigor team. As a result, we had to work with the animations we had. Thankfully, one of our scripters, who is really skilled at animating stuff, was able to take our existing animations and make them look smoother and more natural.

Performance Enhancements For Next Gen Consoles

Here’s another thing that our community was asking for that we managed to introduce in Season 9: players on the Xbox Series S|X will be able to enjoy Vigor in 60 fps! And this is only the beginning. What we plan on doing next is to use the additional power we get from the Xbox Series X to boost image quality. Our team would like to increase the target resolution, boost the quality of the shadows, and sharpen the overall image. But we still have to investigate it. However, even though we’ve brought 60 fps to the Xbox Series S, it doesn’t provide us with much room to introduce further enhancements like the Series X does.

We decided to give some love to the Elimination mode with this Season, which is why a lot of important changes were made. First and foremost, we switched off team killing! Hooray! On top of that, we added more weapon load outs before each round. Last but not least, we’re introducing an Elimination crate as a reward, similar to the Shootout crate!

Here’s how the Elimination crate works. Each member of the winning team will receive one Elimination crate, as well as XP rewards based on their score. The only way you will not receive any rewards is if you keep shooting your teammates, which will result in 0 XP and no crate. The Elimination crate has 6 slots, each one representing a different item you can receive. Check out the table below to get a better understanding of how rewards from the crate are distributed.

The question now is, “What if I’m on the losing team?” Don’t worry, you won’t leave empty handed! If your score is over 1000, you will receive a common crate, as well as an XP reward to compensate your time spent in Elimination mode. This applies to all team members, except for those with a score less than 300.

You’ll be happy to know that the Portable Signal Detector bug has been fixed! The PSD will no longer ping a random person in the lobby but the closest one to your location as intended. In addition, we have also fixed the Legacy Season visual bug where the icon of a crate is displayed instead of the icon of the reward once you claim it. We have also made a few fixes on the AK-M and RPK recoils so they should feel much smoother now. The last batch of fixes include the fix on the H-BAR bi pod clipping with sights, and in the crafting menu you can now equip consumables 1-by-1 as a default instead of stacks. Last but not least, we have swapped the “git gud” text while the leaderboards are loading with something more appropriate.

Czech Out Our New Localization

Great news for people who want to play Vigor in Czech. You can finally do so with Season 9 because we’ve added Czech localization to the game! You might find it funny that a Czech game developer didn’t have the Czech language included in the game from the beginning, but better late than never, right?

We want to thank you again for sticking with us through thick and thin over the last two years! We really appreciate our community because without you and your valuable feedback, we wouldn’t be able to push ourselves to constantly improve the game and provide you with a better gaming experience!

We’ve prepared a lot of fun and interesting activities during our anniversary week, so keep your eyes open for more info. And here’s to another year full of vigorous events!

We hope you’re as excited for Season 9 as we are, and that you’ll enjoy throwing a grenade or two around.

As always, see you in the Outlands! 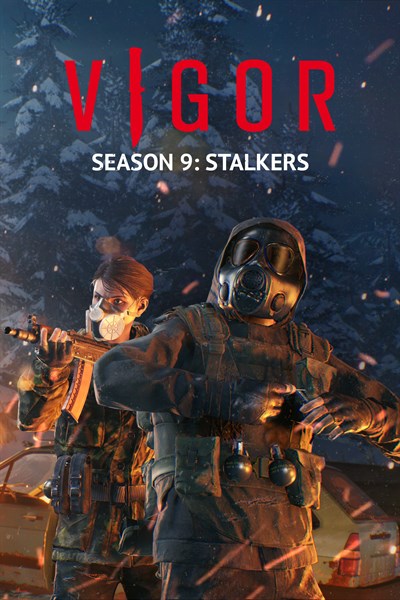